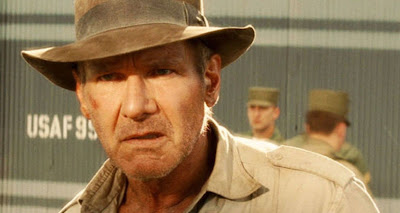 Leo was alarmed at all his mates dying

Bar a last minute character change (our Guardian switched from Ursula to Leo Anderson) we started a new Dream Eaters campaign today. I will try a new structure for these covering Scenario theme, Investigator Notes and then card of the game , card disaster sections.

I liked it. The hospital setup was interesting and the 'falling down the stairs' when entering the basement on the spider web covered bannisters was particularly amusing. Having to handle the orderlies (and possibly their corrupted brethren) was also nicely thematic as was the swarm on the Spiders. Due to luckyish card draws  we never ended up with to much to handle, spider wise, until the very last turn where all of a sudden we had two corrupted orderlies and two big spiders on us and then we could just advance the act, take the opportunity attacks and ignore them.

The scenario does not have a multitude of locations and those that are there are interesting plus I really liked the infestation mechanic which made for some interesting choices.

We did well.. We finished just as the third agenda started (and only hit the third agenda because we wanted a couple of extra victory points) and all the nasties started arriving. In the end we obtained a satisfying seven victory points and weren't really threatened. Most of this was down to luck. The infestation bag managed to draw almost all the tombstones continually so infestation levels were down. When Luke 'fell' the stairs the first time he managed to fall into Carters location and bar one turn where Luke managed three auto fail tokens in a row the group coped with everything throw at them.

Everyone did their job! Which is a euphemism for 'no-one was card starved of key cards'. Mandy had some difficulties with the cost of her cards (as expected) but still managed to be a clue machine - an early @@@@@ followed by a Fingerprint kit really helped though. Everyone pulled their weight clue wise even Leo pulled of some impressive clue gains with useful events. Leo failed to get many companions out and those that did arrive seemed to be discarded or die with depressing regularity. On the other hand once drawing 'Glimpse of the Underworld' he did not fail one skill test until the end of the game! Luke showcased his power by disappearing and reappearing all over the place (his ability is really strong….). Finally Stella (armed with a sledgehammer) was a competent spider killer and used her own (fail and get another action) ability to good use. The team appears nicely balanced actually.

In a scenario where everything went well this is hard to select as lots of cards did their job. I will go for Stella's spider squisher extraordinaire and her sledgehammer just as it prevented the group having to refocus on killing things a couple of turns which kept momentum and thus helped success. 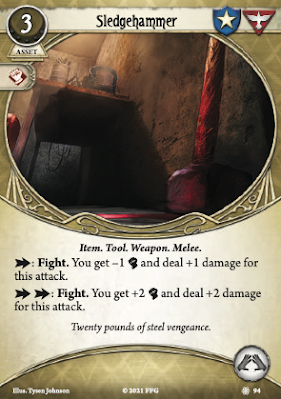 Nothing was really scary, to be honest,  as those encounter cards that did occur were nicely separated. At one point Mandy drew a swarm of spiders and Leo managed to kill them all without engaging them or hurting Mandy (those spiders had alert and retaliate as well so this could have gone badly wrong).In the very last mythos draw Leo had a (now) corrupted orderly on him and drew a 'Grey Weaver' in a location with 'Sickening Webs' and with agenda three in play so could not leave and the Grey Weaver was a 5/5/4 with retaliate and alert. Even with his trusty survival knife killing that would be a big 'ask' especially as we only needed to do it to gain its solitary victory point. Therefore for this scenario that can be the Enemy of the game. 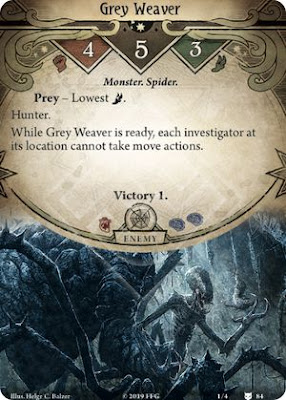