The Night of the Zealot - The Ghouls Hunger

The skies were darkening as Daisy James - ace librarian hurried over to the rather grotty old house of the angry detective Roland Banks. She had met him a few days ago when he entered the library to carry out some research on the disappearances that had been occurring all over town. That other man would be there too - 'Skids' he liked to be called though Daisy was unpleasantly conflicted between this referring to his balance, his past luck or perhaps his underwear. He had overheard the discussion whilst being sat in the children's section working his way through a picture book. She couldn't fault him for trying to better himself but certainly could for the lack of hygiene.


The house was in a disreputable section of town - all leaning town houses and rotten wood. You would have thought a detective would have a better income. But perhaps he wasn't that good a detective or he liked living where all the crime was. A tramp leered at her as she scurried past and she held a handily large encyclopaedia against her chest as if to ward him off. The tramp shouted after her, 'hold on I'm coming as well' and she suddenly realised it was Skids climbing up from the pile of newspapers he had presumably been sleeping under. 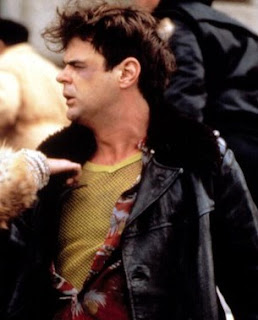 He attempted to take his hat off before remembering he had not  got one on, "Oh where's the damned hat"

He started searching in the bin behind him," I kept it in here to keep the rain off. Little short of readies at the moment…Do you have any", he pulled a battered fedora fishing out some chicken he appeared to have stored in it for a snack.

"You know, it's not that I don’t enjoy our little talks, it's just I don't", she turned and stalked off hoping he wouldn’t follow which of course he did.

What was worse is that he promptly started nattering and laughing at his own jokes. Apparently he had just got out of jail and was expecting trouble. To prove his organisation he started pulling out a large array of objects from his many pockets. This included several alarmingly violent items and some less so including a cork screw and what appeared to be inappropriate photographs of some disrobed Chinese ladies along with some toilet roll.

"Wonderful" she thought, "equipped for every eventuality"

"You must have come prepared"

"Prepared for what? We are having a meeting and I have discovered several really fascinating books that will shine a new light on the situation I am sure. "

"Books? What use will a book be if something tries to kill you. Or are you expecting to rely on me?"

She looked him over contemptuously, "It’s a meeting in a house. Owned by a detective"

"hmph PI, thrown out of the police force"

"You don’t know that"

"I do. I am much acquainted with law enforcement in this here town"

The conversation thankfully ended at that point as they arrived. With some distaste she studied the house. Circa 1800 she guessed. Never a good part of town and it had gotten considerably worse since being built by what appeared to be mad dwarves with quality control issues. She wondered briefly what had attracted him to this area and from the dress code of some of the local 'ladies' made some reasonable guesses.  Skids in the meantime appeared to be working out escape routes as they waited for their host to arrive. 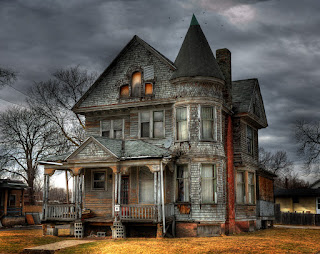 Finally the door creaked open and Roland Banks appeared. It had taken long enough as they had been propositioned twice and had a small child throw what appeared to be faecal matter at them. Luckily it had missed and hit the house where it appeared to make no difference to its appearance or smell.

Roland took them straight up to his study which was covered with newspapers and reports. At least the inside of the house looked better than the outside.
Posted by Matrim at 12:52