The Dunwich Legacy - Undimensioned and Unseen 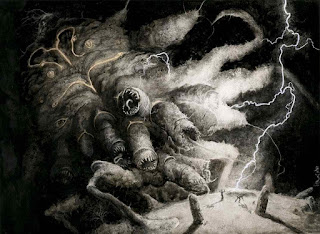 Why did Armitage and Morgan come back. Seriously? would you??

This is a hard scenario and success in the previous makes this harder still. So before starting I had to decide on what to spend my next 6xp on and eventually decided on using 5. I upgraded one of the Vicious Blows to level 2 for 2 and for next card went for the permanent 'Stick to the Plan' - as a default I can put Shortcut, Dodge and Prepared for the Worst under there. The PftW allows me to get a second weapon (or starter if none found yet) with the shortcut and dodge being generally useful. It also thins my deck down to 22 (once starting hand has gone) so makes it more likely to get a good start and get to the cards I need. Perhaps this will help.

Dear Diary
Smelly, unco-operative, small minded and peverse. But lets not think about Rex and consider the townspeople of Dunwich instead. The 'arse end' of the Universe. I vaguely recollect reading that the mob had refused to set up there as it 'didn't want any trouble' and were distressed by the moral degeneracy. I've always wondered whether those tales of inter-marriage in the deep south were true and lo and behold it certainly appears that way here in New England. But they are still God's creatures. Disgusting, filthy, evil though most are. Let me see if a handy bible quote can indicate the forward...


But for the cowardly and unbelieving and abominable and murderers and immoral persons and sorcerers and idolaters and all liars, their part will be in the lake that burns with fire and brimstone, which is the second death.


Hmmm I cannot quite organise a burning lake. Perhaps more thought is needed. 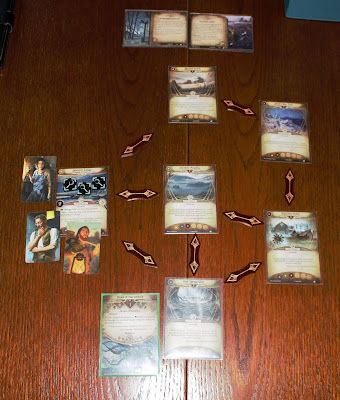 Starting map setup. Prior to all the arrows getting pushed about in the stress of the game

One of the things I particularly like about this is how clueless the Brood are. They roll about crushing everything in their path - but we are much like flies to it so essentially not even recognised most of the time.  The fact that 'normal' weaponry cannot hurt them is entirely understandable hence the need for special spells. This does provide one of the few advantages for the players in that if you are 'in' a location with a Brood you know it will wander aimlessly off rather than squish you.

The early part of this scenario went reasonably well. We avoided the lone Brood whilst Rex clued up and Zoe and William tooled up. The nastiest thing to happen was that both Zoey and William drew early 'the creatures tracks' and both took two early sanity lossed as the horror of what we were about to face dawned on us. We therefore flipped the act relatively easily but considering that cleared us of clues it left us in a more risky situation.

The problem we now faced was that the various thralls were also popping up. So a situation arose as it usually does. At the end of the turn a Brood lumbered into Zoey and Rex's location at the Whately place. This one had Towering beasts attached. Then the agenda flipped and a second Brood spawned at exactly the same location. The encounter deck drew another Towering Beast before another 'The Creatures tracks' was drawn which drew another Brood which dropped on top of William Yorick in the Blasted heath. Lovely. From being in control we were now not. 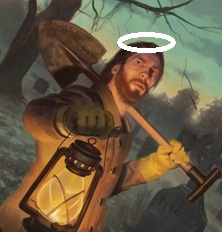 Actual, professional, footage of 'Saint' Yorick taken on the day.

Yorick now pulled off what would almost be the play of the game. He played the Red Gloved Man ,and chose 'will' and 'evade' to pump, then moved to the next location drawing an attack of opportunity from the Brood present that he placed on the RGM. He then moved to the Whately Place and discarded his Police Badge to gain two extra actions. With this he evaded a first brood, used his powder of Ibhn Ghazn on it twice (fast action) before damaging it.

Wow. From 'damn, cannot do anything much here except try and survive' had been changed to , 'we can kill one potentially now and next turn the other two might also move to killable locations'

So that is what we did and between us we wiped out the first Brood. Not all was good as my end of turn card was my weakness and in this deck it just draws unpleasantness. An avian thrall thus also appeared. Amongst the usual encounter cards 'Altered Beasts' was drawn (great art) which we placed on the other Brood (for a reason , I now had a Key of Ys in hand so could soak the horror damage and it would make me more effective). 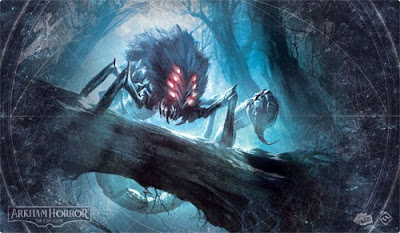 Art as good as this deserves a playmat too itself. How it moves with a tail that large upsets my engineering senses...


We then spent a good few minutes discussing who to attack and where as both cards were in 'attackable' locations and eventually decided on the central brood. It was stronger than the other but had a good chance of moving to unattackable locations next turn. 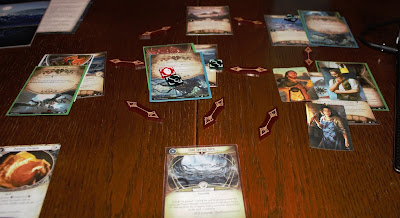 Decisions, decisions. Who to attack and where

Rex moved in first and used the fast action to attach a clue then he attacked with higher education to do a second and third damage. Zoey then attached the Key of Ys, shortuctted in and did another two damage (lucky chaos bag draws) to kill it off. Yorick was not needed so could play some cards and move down to scout Cold Spring Glen.

End of turn the Thrall moved in and attacked allowing me to power the key and to thwack it back for two damage with my survival knife. Nice..

The game was not finished trying to take us down though as Yorick drew Graveyard Ghouls. This was now cause for the arrival of a true hero. Yes indeed Yorick was back. 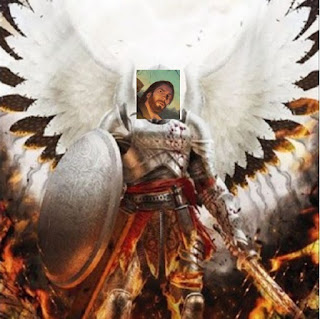 An artists impression of Yorick that day,

Why faff about? Yorick could do no wrong. He threw a knife at the Graveyard Ghouls doing two damage then left the location dropping the Attack of Opportunity onto his Guard Dog allowing him to kill them and pick up his knives. He then arrived at the central location and threw his knives at the avian thrall killing it too.

Epic music was needed for how Yorick was 'owning' this scenario.

This allowed Rex to move over and attach some clues to the next Brood  and hit it a couple of times before I ran over and finished it off. Three down!

We actually had a couple of turns to wait before the last Brood appeared so we variously geared up (I put a second Key of Ys in play (Rex handily healed some Sanity from me before playing 'No Stone Unturned' to allow me to go get it). With the Relic Hunter in play I am allowed two accessory slots in play so can get both out) . We then moved to various useful locations to cover the options.

The agenda flipped and the last Brood landed on top of me. I failed the evade test and promptly took another horror and more damage (I had 4 damage on me so it was a 6 test, or something like that). Both Keys now had two horror on each so I was Godlike in my powers..The encounter deck then added a whipporwhill in the same location to make it a 7-4-4 , another whipporwhill with Rex and a Lupine Thrall for Yorick - but this was not enough to stop Zoey  who fast played Taunt to get the whipporwhill to engage then fast actioned the clues from the location and then hit it three times with 11 willpower (4 from the keys, 4 base and 4 from the clues, -1 from the bird). Doing three damage. Not enough to kill  but from the dim mists came striding a figure. 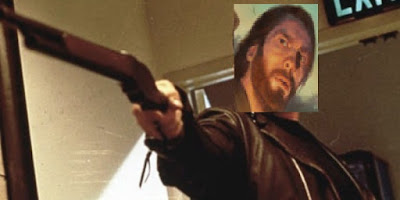 Perhaps we need to sort out some sort of Latex costume for Yorick. Yorick killed the thrall in two actions, grabbed his Police Badge from the discard pile moved a location before discarding the Police Badge to move into the final location. Played 'Will to Survive' so he would not draw Chaos tokens. Then (with Zoey pumping with her cross) did exactly the same damage to toughness and killed it. 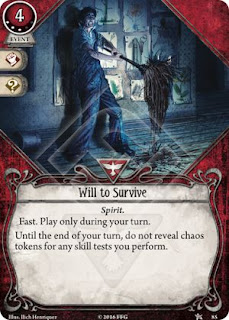 Wow, what an ending and what an epic game by Yorick. We actually considered resigning early on as the pressure looked to be too much but I am really glad we did not. The next scenario is the dreaded penultimate deadly one and now we will be starting with more time and with five more experience. PLUS due to the way we ended the last scenario we wont even start with a conglomeration of spheres in play. Sweet....

The Brood!. The Thralls were more annoying but these are almost iconic lovecraftian sub-monsters. Once again great art. 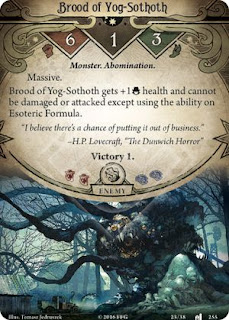 Did you read what Yorick did this game? No more comment is needed