The Dunwich Legacy - Blood on the Altar 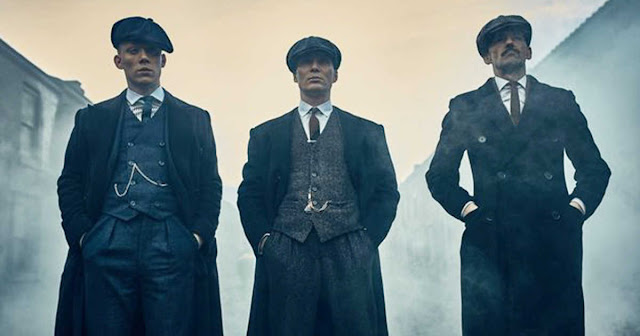 We have finally arrived in Dunwich and, if I may use crass language, what an utter shit hole. The place looks like its forgotten its no longer in the time of the pilgrim fathers and that interior toilets are an actual thing. I don't think I have ever been quite so depressed by any place on God's earth. And I have visited Chicago...twice....  Every step so far we have been hounded by the despicable minions of the evil one.  Is this the epi-centre? or just another dump stop on the way to doom?

And I will punish the world for their evil, and the wicked for their iniquity; and I will cause the arrogancy of the proud to cease, and will lay low the haughtiness of the terrible.

So Dunwich. A real estate agents nightmare.  Due to the 'House Always Wins' we will have the gangsters hunting us down but as none of those will come close to being a real threat to Zoey  I think they may turn out to be a pleasant relax from the other, nastier, encounter cards. As the famous saying goes, 'a gangster card a turn keeps the horrific other encounter cards at bay' - or something like that. 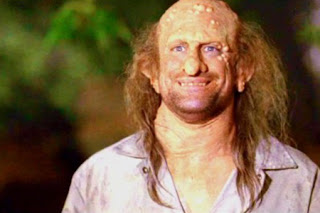 The locals, in Dunwich, were perhaps not pleasing to the eye.


I really need to get my hands on a playing mat but, to be honest, cannot really afford it. On the other hand my general game pimping has gone well. A couple of scenarios ago I passed a new success marker. Craig had just announced he had purchased several cunningly disguised card containters which looked liked books and Egoitz promtply said he also had purchased something equally useful and I did think'here we go again. No doubt a container  carved from dinosaur bones by Salvador Dali but then he held up a plastic box. Yes indeed I have also purchased plastic container boxes myself. This therefore managed to not pitch me into a horrific depression on how un-pimped my Arkham set was. Anyway back to the game. 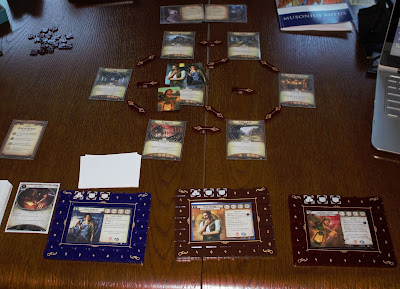 Obligatory Setup shot. The burned ruins were actually removed (due to playing over pcs setups depend on when we all connect and can speak to the player running the locations/encounter decks)

This scenario is essentially two clocks. Your success (or otherwise) is very tied to your speed versus these clocks. This is one of the common facets of the game but elsewhere the encounter deck can be more troublesome whereas in Blood On the Altar it's primary aim is to increase time pressure which I find particular easy to cope with (no more sweating that the encounter deck you draw will break you..).

This did turn out to be an immersive scenario due to some lucky draws. For instance even though I managed to get no knives I did draw Doctor Francis Morgan first turn and Yorick got out Armitage first turn. Both highly relevant characters for this particualar location. The other immersive event occurred later. 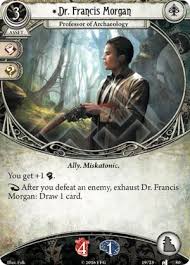 Morgam, been in Dunwich before..done that...didn't enjoy it even slightly

The first clock is much harder the less investigators are present and is tied to the luck of hitting the correct two cards early enough. Due to the amount of 1 and 2 clue (only) locations multiple investigators can clean sites out far faster and this, essentially, is what happened in this playing. Plus we were lucky. After a standard 'kitting out' first turn I had wandered over to a one clue  4 shroud location which I cleared with 'Working a Hunch' and its encounter card turned out to be the key to the chamber! 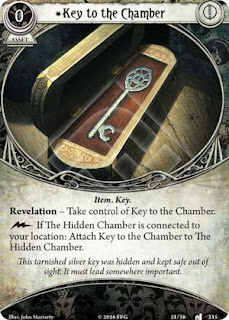 The following turn Rex cleared the general store (Rex is particuarly good in this scenario as he decreases the clock pressure) and flipped the hidden chamber.

Clock One down. Now things were not entirely rosy. We had included the other Necronomicon in the Museum mission and this scenario it started to bite us. We had repeated drawings of the squiggly head so the agenda flipped fast and someone was sacrificed but still that could have been worse.

We now had to prepare for clock two but the game introduced an entirely random 'nice' touch in that all of a sudden we started drawing all the O'Bannion thugs all over the map so it 'appeared' as if they had co-ordinated a simultaneous attack. Which was wiped out but still it felt most in character... 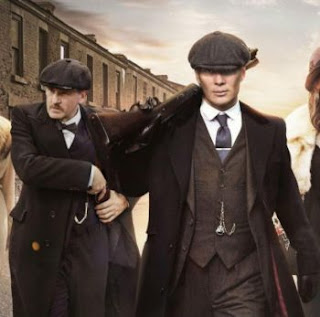 Here they come and they are not happy. Even less happy once we eivscerate them but that's their fault for bringing guns to a Cuthulu fight.

The other amusing event that happened around now was that we had drawn a servant of many mouths and I had moved to engage with my last action placing a damage on it with my lovely cross. Yorick was now most heroic and moved into the commons to hit it with his machete. First action - auto fail. So instead of the servant he hit me (as I was engaged) for one damage then suffered the retaliate giving him two. He then tried again and drew -3 so hit me again and suffered more retaliation. Most amusing. I killed it with one thwack the next turn  (even though I was knife free at this point) mainly as I was worried Yorick would kill himself if he tried any more.

Anyway back to the clock. I used a shorcut to speedily get the hidden chamber in play so we could start the second clock. Here since Silas is so un-dangerous you essentially get a choice. Either stay in the location (and get hit 2 damage 2 mental) each turn and attack/get clues or enter carry out one action and leave. Either is possible and if a team has taken little damage then staying in the location can be fine. We had plenty of time so took the slower option of entering and leaving. Well I  say slower but as Rex had Pathfinder in play he could actually move in for free, take two investigate actions and then leave. The only stresser was the store had that encounter card that deals one horror if anyone if present at the end of turn.

Even with this speed improvement the next agenda flipped and a further sacrifice occurred.

When we finished Rex also had the Necronomicon out so we actually hit Resolution 2 which was a pleasant surprise and a first for all of us. 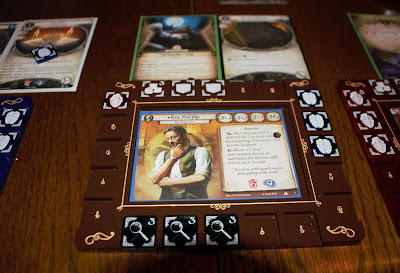 As always Rex is covered by clues.

Without Rex or with a harder time finding the entrance this would have been much more time pressured. As it stood Rex practically solo'd the scenario with Zoey and Yorick running interferance on the monsters in the encounter deck. It's not all good news though as this is the scenario where if you do badly it makes the next one easier and the next one is a b**tard one to get through. Due to Yorick's signiture card we pulled in 5 xp again so we will be appoaching it with the most tooled up party I think I have ever had.

In terms of appearance perhaps Silas Marsh but this time the winner is the Servant of Many Mouths. Mainly due to him turning Yorick into a collinder whilst Yorick repeatedly hit me in the face with his machete. 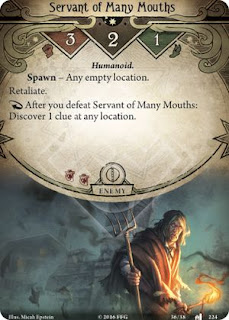