Well it is getting near the end now. Our valiant trio have travelled to Mont Saint Michael to potentially sacrifice all to save the entire planet. We are quite the well honed machine now. Except Min. Min started as the quite 'paranoid, schizophrenic, manic depressive' as she drew almost all her weaknesses turn after turn for the first few turns and essentially spent all her time working on the 'inner' Min and probably through several mother and father issues as well. This left Jenny and Agnes having to do the dog work in the early stages but this was not a major problem as this is one of the few where doom can assist. We basically organised to generate the most doom possible so we could find out what (and where) we had to go as quickly as possible. I had drawn both shrivelling and rite of seeking (buwahahaahah) though after an auto fail on an investigate I also had to use time warp to ensure we did not drop behind plan. At one point my personal weakness put up so I happily played it to add doom to our preferred agenda (now that is not a frequent occurrence).

We absolutely blasted through the C pile getting to 3c surprisingly quickly only to discover it was the wrong path and we should actually have tried a. One nice point that Craig pointed out was how thematic the Outer Walls and tower were. If you were on the tower and doom went on one of the agenda piles then you would go a little madder seeing Carcosa approaching whereas if you were at the sea wall you would take damage as it was literally battered to pieces also by Carcoassa.

It was when we were all at the tower that one of my favourite moments occurred. I had engaged an acolyte and in the previous enemy phase a Rift Seeker turned up. First action next turn Jenny parleyed the creature, added doom to both agendas which caused the creature to leave. The doom caused us all to take one horror which allowed me to kill the acolyte with one zap from Agnes impressive head.

Anyway Minh had gotten over her 'issues' and was not clue gathering so we gained the nine needed to open up the chapel. I evaded a Spawn of Hali that was sitting on the broken steps and we moved across. We had already found the guide and were almost at getting a key when the agenda flipped (thank you wizard of the order for services rendered in moving the agendas quickly) and revealed that we had to go to the Chapel. Now a Beast of Alderabran was sitting 'on' it and we had a Tidal Terror approaching slowly through the town. The Wizard was still gaining doom and the 3c agenda had three so we had both time and combat issues. I personally had Silver Acolyte issues but used my Shrivelling and drew a skull which was just enough to do the two damage and add a horror to me doing a further mental trauma allowing a further (deadly) damage on the Silver Acolyte (here is where I blow raspberries in all evil acolytes general directions) 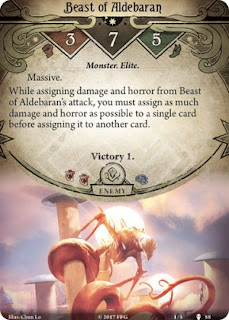 The final play will gain the play of the game designations and goes to the team.

Jenny moved into the Chapel and evaded the Beast of Alderabran (Key of Ys made her real fast) then stole a clue before doing two damage to the creature (Leo de Luca in play). This allowed Minh to pathfinder to a shortcut to get there then throw two successful strange solutions in its face killing it. I could then attach my Athame, move in and use Rite of Seeking to gain two clues. During the enemy phase I blocked my unpleasant card with Ward of Protection and we then cleared all the clues. I say 'we' as Minh managed five on her own.

Hmmm. Nothing really killed here and as in the entire campaign we really lucked out in having killed all the theatre members as we avoided another Grade A nasty turning up and complicating things in an unpleasant style. Technically the Beast was the strongest but that was dealt with easily….So this scenarios monster will be the Rift Seeker just for being thematic and looking cool 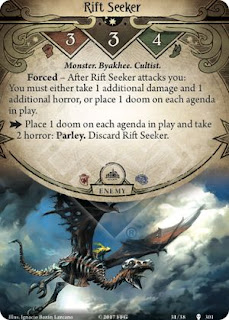 Another nicely designed scenario. I also loved the way some of the encounter cards become more dangerous as Carcossa comes closer causing damage from debris (or to the mind) or breaking your items (discarding cards whipped away by the wind! Or shattered by a rock). The fact either agenda path could be correct is hilarious and allows for many possibilities.