The Path to Carcosa - The Pallid Mask 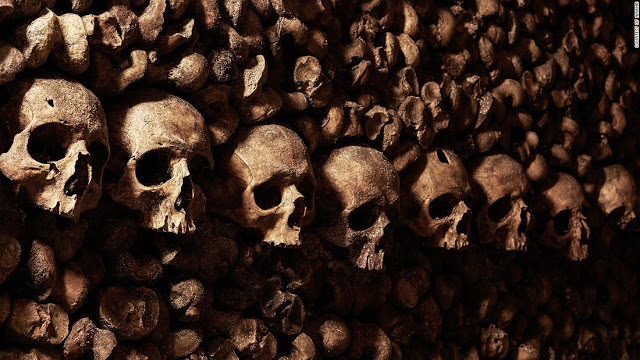 The Catacombs! I loved this scenario the first time I played it and our group just managed to survive by the skin our teeth. Now to return with our tooled up and remarkably undamaged group.

We had the ideal start with the secret passageway in play and an easy entrance to the tombs but then hit repeated road blocks. My start was decent (Shrivelling and an Athame being the highlights) though for once Leo did not show up to chaperone Jenny. Perhaps he was scared of confined places? Or skulls.. 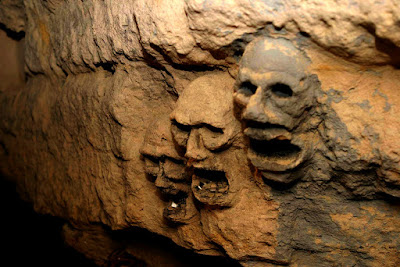 Someone has way too much time on their hands

The decent cards did not help as the scenario then buggered up our catacombs draw with always  at least one slot taken up and gradually we had all the horror of two long corridors with neither connecting and when a final 'above' would have joined the two we instead got a 'below' so they didn't.  This created difficulties....

Another thing I like about the scenario is that it dangles lots of Victory Points in front of you but then gives you lots of ways to subvert and speed up (docents and location revealers). If you chase the vp then you may be at risk of failure but if you use the 'shortcuts' you could miss out on lots of vp. As it stood we relied a lot on the shortcuts to allow Agnes to progress along the northern corridor while Minh and Jenny became progressively more embroiled in the southern which ratcheted up the urgency nicely.

I think the group would have been screwed though especially when Minh and Jenny finally exposed two of the final five locations in the southern path and neither were the key ones. This meant that Agnes (who was standing next to the last unexposed three in the northern corridor) was certainly next to the key locations but sucked at getting clues so would have difficulty getting them all. With the Specter of Death sweeping merrily around as well it looked like it would be a long night. Though as a plus we did not have Haruko their to complicate matters further. 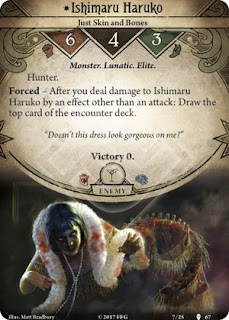 I suddenly wonder how all the King in Yellow monsters from the U.S stage show managed to get to Paris? Admittedly in this run through they all were burnt to death on Jenny 'I murder multiple people on a whim' Barnes but still. Wouldn't the ship staff (or air ship/hostess as I doubt mass plane travel was common) notice the tail or the 'eating other passengers instead of a steam cooked plasticy meal'..Enquiring minds need to know.

But things did manage to start to swing round. I managed to draw 'Drawn to the Flame'  which gained two clues then Jenny pulled a blinder. She used Elusive to move straight to my location and opened up a catacomb, which naturally enough was not the key location. I then luckily gained a third clue on a 2 shroud location (with two 'books') by drawing a zero (I had the actual lucky in hand so could have coped with worse) so we opened a second and it was the key chamber. At this point we had enough clues between us to advance the act immediately and not too fight the stranger. This led to us all needing to be in the blocked passageway which , by a process of elimination, must have been the final unrevealed location. The problem here was that Minh was stuck in the south wing with two docents,coprse dweller and two poltergeists close by (with two locations doing damage on leaving) and the Specter of Death  steadily approaching. 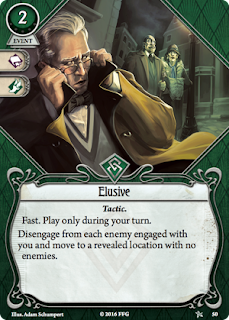 Jenny though was having none of it and used a second Elusive to shift back to the location next to Minh where she talked a poltergeist to death then moved next door to engage a docent. This allowed Minh to talk her own poltergeist to death. Another well organised turn had Minh killing another docent while jenny finished off the Corpse Dweller (nice concept of an average monster turning into something much nastier)

I am fairly sure that is an unusual look in Paris and quite probably elsewere. Except perhaps Chernobyl

While this was going up Agnes had drawn Rite of Seeking so was now merrily getting many clues and opening the blocked passage. She's a waitress, she probably has had to clear a lot of blocked passageways at the café. 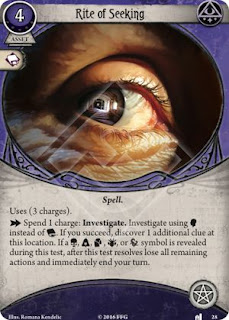 Ahem. Anyway while Agnes kicked her heels in the end location now came the charge. Jenny moved to evade the Specter of Death and moved two locations on (thanks Leo) before Minh ran even further past. Another two turns and we completed.

I think I prefer the 'killing the stranger' ending to this one which was a bit weird but nothing like as exciting as running through the flooding catacombs. Be that as it may we had finished with no trauma (though we were all fairly beaten up) but only one expereince (from a Delve to Deep from Jenny) this is our worst ever experience total.

Jenny must get it from her zippy movement skills in freeing up Minh otherwise this would have resulted in our first defeated investigator.

Honourable mentions include Agnes playing 'Ward of Protection' to stop an encounter card that would have changed the docent Minh was engaged  with into something much nastier (as the only humanoid present) and falso or both Minh and Jenny who early in the scenario when Agnes was in a narrow tunnel with the 'Pit Below' attached but could not move to the new catacombs location and we did not want to wast time moving backwards. Minh moved first and gained enough clues to open a southern location allowing Jenny to move in and parley with the docent allowing the location next to me to be displayed and thus the group to progress and not tread water.

Basically it was a solid team effort.

Though it did not do any damage 'Specter of Death' gets the award for being cool. Tough little SOB. If we were all organised and in the same location we might have been able to take it out but seperated there was no chance its clever ' do an attack if you fail an evade' ties really nicely into the fact that most of the time you are furiously running around the catacombs as opposed to fighting.. 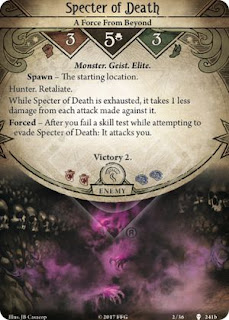