The Devourer Below NOTZ Reprise 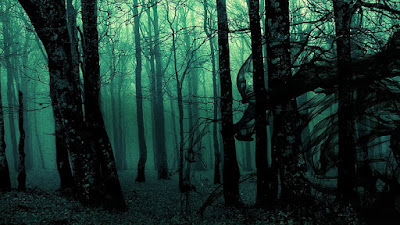 This could have been a tale of how a gang of investigators thwarted the presence of a great evil…But wont be. This scenario went down hill so fast my tea did not get too cool down. The biggest plus point was that Wendy managed to draw and get Lita out (and lots here will know why that might matter. It wasn't all bad though as in the first two turns we actually managed (between us) to get eight clues! That was it though it then sucked rim. I am not quite sure where to start so let's run through the investigators starting with my lovely Agnes.

Only an average starting hand though having to discard two of them didn't help (scenario start restriction due to not finishing before midnight last scenario). No tools for fighting at all and even though I ended up in the location which required willpower to investigate I failed the first test with minus 4. Next turn I drew an encounter card that required cards to be discarded or horror/damage is taken. I lost that test by 4 and could only discard 3 cards so ended up on 2 damage and 1 sanity lost before really starting. A ghoul then hit me to give another damage and the next turn encounter draw was grasping hands which (yes) I failed by 3 (tentacle draw so -5!) being knocked out…again…

Next up Roland. Roland looked like he was ready to go and just as two three enemies spawned (including a Wizard, Acolyte and irritating monster thing he managed to get Frozen in Fear alongside his weakness (fight/move/evade actions cost 2) whilst being in the location where you have to test books to leave. This required careful planning but thanks to Daisy's pumps Roland did manage to eventually get out (after two turns) where he equipped his BAR Rifle and took a plus 4 shot against a monster and drew auto fail wasting tons of ammo. Next round he did take out the Wizard but was perilously low on health and then drew rotting remains which he failed by a three going insane and also being knocked out.

Wendy spent a lot of the early game running round evading things until she got stuck in the location which requires fists to investigate. So couldn't. She was also steadily losing health even with multiple friends in tow. She did save the day though by drawing Lita just in time to accidentally trip her into Umordeths maw (We didn’t even get past act 1 - that first turn seven clues was a high point as firstly Agnes went down dropping it to five and then Roland went down dropping it again).

Daisy actually had the most secure day of all the investigators keeping a decent health/sanity throughout. Having both Agnes and Roland unable to deal with the multiple monsters turning up meant that she also spent a lot of time staying in a single location tooling up.  Her ability to pump a stat by +2 (due to a book asset) was key to even getting as far as we did though.

Conclusion - This was hard. We did get out without total defeat but the draws made continued a tradition of being crap. Next up we are going to switch to Carcossa. I will be running Norman Withers the Seeker (he looks good, from the books), we will also have Guardian Zoe the knife fanatic, Achele the Mystic and '' the Rogue so an interesting group. I will do a preparatory campaign post on the starting deck prior to the campaign start. Just so I can make guesses as to 'usefulness' that will no doubt be proved totally wrong once playing.

Yithian Observer - These kept turning up and proving to be hard to kill. Thinking about it loads of ghouls and acolytes kept turning up so the fight pressure was enormous. 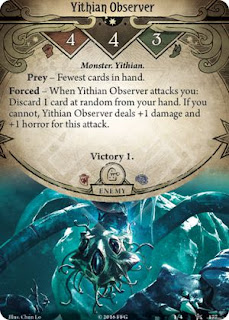 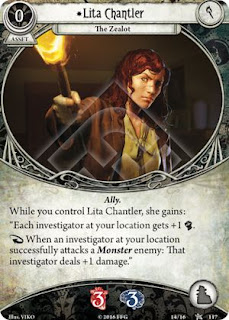 Lita Chandler - for when everything sucks and you just have to sacrifice someone to save the world.