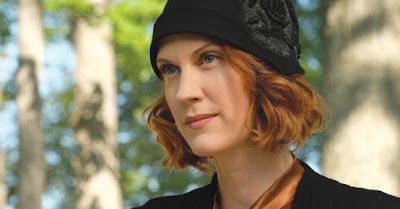 Lita 'not shouting yet'

Back to playing and it has been missed. As a change from previous groups my new team is a four person group so it will be interesting to see how a different max player count makes to the scenarios and if it impacts play or immersion in any way. As with previous AARs (After Action Reports) this will be less fiction based and more on game play and approaches taken to the scenario.

No hard rules were really set for this but mostly all the decks were base set compatible (I think a few cards from out of set were used but not many). The teams characters were Agnes (me, I do love Agnes and wonder if her shrivelling spell was learnt dealing with scum bags trying it on at her place of work), Wendy (played by an experienced player), Daisy (everyone's favourite librarian) and finally Roland. So all in all the group was nicely balanced.

Wendy was the group leader and for the first time it made complete thematic sense why a) the house was a tip b) was totally filled with random weirdoes shouting a lot, who Wendy did not know. Basically it was an empty house all the local homeless were taking over.. So we started thematically, at least until both Dr Milan Christopher and a beat cop turned out to actually also be in the room with no doors. Saying that trying to logically explain occurrences in game is never easy - after all why spend 75 % of the time trying and failing to hit things with fists until 'suddenly' realising that you had a baseball bat or 'gun' in your pocket that might be more efficient.

Anyway in the early running both Daisy and Roland did their jobs well and rapidly started hoovering clues. Daisy the old fashioned way and Roland by dint of hacking various creatures to death with his machete. We shot through the first act but then hit a traditional Arkham speed bump. Roland suddenly found he was 'trapped by fear' (possibly of the repercussions of killing so many things with a 'beat cop' standing next to him) and was then unable to get out of that for two whole turns and when out of the trap then was hit by a weakness which took out another two actions. This took the main fighter out of the action. Fortunately Agnes, she of the gimlet look, was well prepared to help as she had an early Shrivelling and all four charges were rapidly used pulling various nasties off of Wendy and Daisy. Her 'one, two' of damaging a creature, letting it attack her, taking horror and then giving one damage back for that point of horror worked nicely. Meanwhile as most of the group huddled in the cellar it became shrouded by fog pushing it to a nasty six shroud. It was starting to look like the beginnings of one of those slow motion Arkham train wrecks but things suddenly started resolving. Just as Roland freed up in time to kill a monster, Daisy cleared the shroud and hoovered several clues with Agnes and Wendy each helping on the clue front the Agenda shifted again (after no less than three Dooms were drawn in the mythos phase) and suddenly we were in the last agenda the turn before we shifted to the last act.

The Ghoul Priest is a most unpleasant opponent in a four investigator game as he has twenty health. As a counter he was slightly less 'dangerous' as the group has enough 'weaker fighter' characters to engage then evade him (Wendy did a sterling job here) so rather perversely he spent less time doing actual damage. Anyway. Daisy wandered to the parlour to 'get' Miss Angry chops 'Lita'  and bring her back to assist in damage and the rest of the group started trying to wear the Ghoul Priest down. In the first turn the group (well Roland mainly) pinned six damage on him but the double doom tokens (one normal, one for a ghoul in the hallway) was very rapidly pushing the agenda forward. When we tied that to another Doom we now got to what was obviously going to be the last turn before defeat. So we had to do at least fourteen damage in one turn…

We started with the obvious damage dealer. Roland thought he could get ten if lucky which would leave only four for the rest of us to handle. Unfortunately Arkham is rarely that kind and he only succeeded twice so did six damage. He finished by using a fast action to get rid of the beat cop doing a further damage. So the priest was now reeling having taken thirteen damage. Daisy stepped up to the plate next and managed three (two from a clever 'card switch to 'books' attack and one from discarding a lantern). The Priest was now at sixteen. Between us Agnes and Wendy needed to do four. The issue was that neither of us had any weapons to help. I had used the only shrivelling I drew early and my baseball bat had 'broken' a round earlier killing a ghoul. Wendy had nothing at all.

I therefore went next. I had a fight of two and the Priest has a fight of four. I did have one 'fist' pump I could use in hand pushing me to three and one 'lucky' which would push me to five - one down is not good odds on standard  even with three actions so I drew a card to see if anything would help and 'luckily' I drew another 'lucky'. That was much better as it essentially put me on seven. I then used another action to get a second resource to pay for the luckys and drew getting a -2 - with both luckys needed I passed by one and did a further two damage. The Priest was now on eighteen. All was on plucky little Wendy.

Like me Wendy had no fighting gear available and no force pumps bar Lita so was on three basic versus four. It would need +1 or the elder sign to succeed which is worse odds than I had. She also had some rats attacking her but she had enough to soak up the attack of opportunity so ignored them. She drew a card and got nothing useful then drew a second card and also drew a 'lucky'. Better but this now meant a -1 or better would be needed. She pulled from the bag a token that failed ( I cannot remember which) but had her own amulet in play so was able to return it and draw again getting a -1 so with the lucky got just enough to do a further two damage killing the Priest.  We had in the nick of time managed to sneak victory from the claws (and bone mask in this case) of defeat..

Since it was actually someone else's house plus Wendy had no real possessions she was remarkably happy to let the house burn down. The team lives to fight on again. 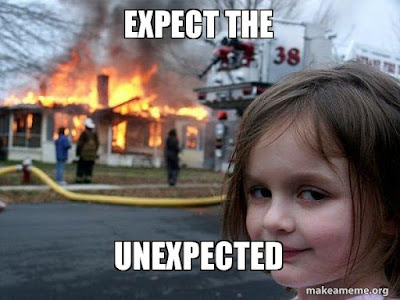 Wendy was strangely unconcerned about her doss house burning down

We gained seven experience each so now get to enhance the decks. I tend to go for efficiency (with Mystics) to make the deck run faster and also went out of set as there are limited useful upgrades base wise so I am looking to replace the baseball bats with Spirit Athame's (lovely assets, they make my spells better and give me a one off fight of four per turn). The other upgrade was harder to pick and I was seriously considering either the spell recharge or something to handle treachery's/doom better but in the end went for Word of Command which will replace the Acolyte (I don’t like the extra doom her use causes). This allows me a much better chance to hit one of both Shrivelling's which the Athame would then enhance. Since Word of Command is also a spell that also helps if Agnes's medallion is in player so lots of cards synchronising with other cards which I really like.

Something struck me in game this time and that is the skill set that make's the game perform best. It Is possible to play the game 'logically' where you do the things you expect to do. For example Daisy spends three actions getting clues and expects Roland to kill anything that arrives but though this can work it often doesn't because Arkham is forever throwing speed bumps at various Investigators. At various points to succeed Investigators absolutely need to be able to move out of their comfort zone and non-combat investigators will need the ability to fight (not all the time just at key points) or combat experts might need to parley/get clues or move something. Part of this is mindset and part is the combination of both deck building and knowing your deck and how it can operate. It reminds me a bit of a quote concerning one of my favourite authors (Proust) which I will now hack to relate to the game

'the true skill in Arkham lies in a player's ability to use their deck cards, many, many deck cards, and to manipulate them with the full dexterity of a three-card monte dealer' 1

The best players seem to have the ability to look at a game problem and work out very out of the box solutions to the problems which would flummox a more 'by expectation' player and deck. If you get several players with this skill then chances of success can drastically increase.

Traditional Monster of the Scenario 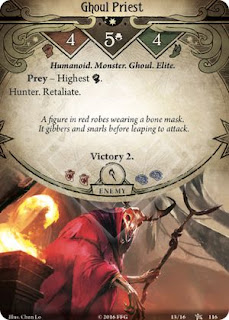 I would have to for the Ghoul Priest which is perhaps unsurprising. It wasn't that dangerous to us but its huge health and high fight stats made it hard to kill and an issue that almost cost the scenario.

Card of the game 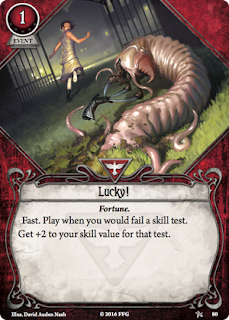 The winner here is probably 'lucky' as it was both fortuitous and all three used copies were absolutely needed.

1 Just for reference the original quote was The grace of French lies in an author’s ability to use pronouns, many, many pronouns, and to manipulate them with the full dexterity of a three-card monte dealer '

Email ThisBlogThis!Share to TwitterShare to FacebookShare to Pinterest
Labels: Arkham, Night of the Zealot, the gathering