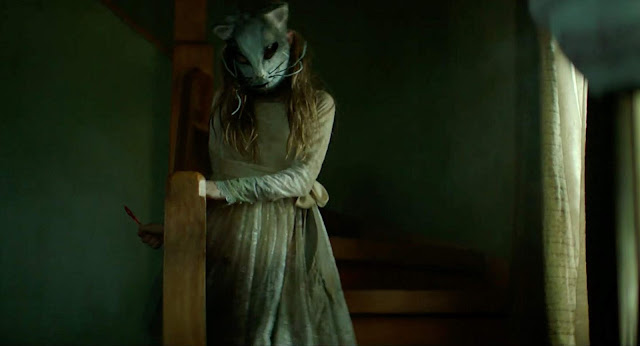 Creepy masks were the rage in Arkham that year

The Midnight Masks is not an easy scenario. The encounter deck packs multiple methods of distracting you either via multiple enemies or ways to remove clues/assets/life/sanity or even to move the Investigator from where they need to be to somewhere they probably do not. Even with those the other part of the deck is just designed to make things harder to progress. It can be most unpleasant..

As we start with four players the game starts with three acolytes with doom which means a quick and bloody start though until the encounter deck recycles it does reduce the amount of enemies who may turn up. That is indeed how the game started for our valiant band. Another decent starting hand meant that Agnes was tooled up with shrivelling and ready to go and one evil doer fell to her hand (mind?) fast. Roland. Wendy took out the second whilst Roland started tooling and travelling to the third. Daisy meanwhile started hoovering clues. By turn two we were acolyte clear and had enough clues to pop a cultist - which happened to be Herman Collins who spawned right where Agnes was. Rather than discard four (useful) cards I decided to zap him instead and bar an initial 'fail' token (these were extremely prevalent in our play this scenario) the next two were enough and we were one cultist down.

Fortunately enough as I was then picked up and dropped in the central location whilst taking one horror and one damage a journey I repeated around four times more due to 'On Wings of Darkness'- this game proving that the monster in question was obviously pretending to be a Uber driver with a very focused idea of where the journey should end.

Things started to get in an unpleasant groove now as just as we would look like we could do something then three monsters would drop and make it much harder. All players were having to fight and the encounter deck was just brutal. We were progressing though. Agnes took out Wolf Man Drew and the Masked Hunter was 'just' taken out by Roland (Roland using his funky new BAR Rifle after Wendy handily evaded the Hunter allowing him to equip )

Whilst Agnes was being repeatedly picked up and dropped (must have come from the bar work .. boom boom) Wendy kept getting Crypt Chills which must have been the games way of saying 'homelessness is bad'  fortunately she had lots of 'friends' and ensured they took most of the damage.

Roland was already close to both madness and death and the arrival of his weakness (Cover Up) didn't help things.

Daisy meanwhile was performing magnificently  getting both clues and fighting until another of the many 'auto fails' was on an encounter card 'False Lead' making her put all four clues back on the location she was sitting on. FFS.

We still staggered on. Wendy managed to evade Ruth Turner (I WAS going to discard a stray cat to evade Ruth but was picked up by another  Uber ) The next mythos phase I had to discard a clue or take two damage. I had no clue and only one damage left so Agnes was wiped from the scenario just as two Hunting Nightgaunts arrived.

My comrades were up to the task though. With suspiciously good timing Roland engaged and killed an acolyte with his fists ('just' on with a -3) allowing Daisy to run to Northside and 'just' Parley Victoria Devereux before the Agenda ticked over and it was past midnight.

Conclusion - After the tightness of the initial scenario the second gets lots of movement in and the always present aggressive clock. It certainly sets the bar for how nasty the game can be.

On Wings of Darkness - repeatedly got in Agnes way and were a total nuisance. Without those Agnes would probably have lived to the end and we might even have got all the cultists before stopping. Boo hiss 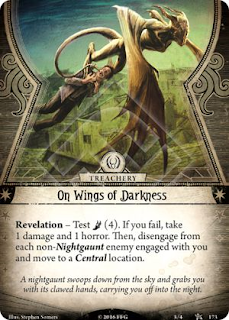 Worse event of the Scenario

Daisy drawing false lead  the umpteenth auto fail and having to put all 4 clues she had gained back on the location.

Card of the Scenario

Roland's BAR which helped take out the night hunter, acolyte with lots of doom and a hunting nightgaunt 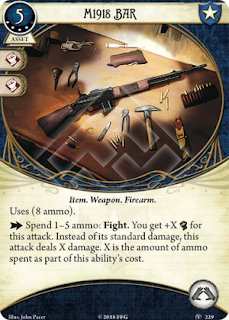 Email ThisBlogThis!Share to TwitterShare to FacebookShare to Pinterest
Labels: Midnight Masks, Night of the Zealot