The Devourer Below - Full Campaign Reprise I 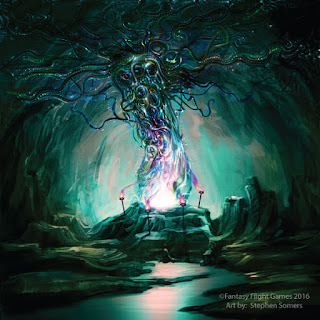 Swift as a shadow, short as any dream, Brief as the lighning in the coiled night; That, in a spleen, unfolds both heaven and Earth, and ere a man hath power to say 'behold!' the jaws of darkness do devour it up. So quick bright things come to confusion.

So the final scenario. With experience you lose some of the surprise and wonder but gain from tactical appreciations  and ability to plan in advance. Here we entered the scenario without the dubious protective shield of Lita Chantler and her amazing 'throw her under the bus' ability in the final scenario. That meant we had to either prevent the ritual entirely or kill Umôrdhoth outright. With only one cultist remaining (Ruth Turner 'evil' nurse ) we should get a good crack at it. 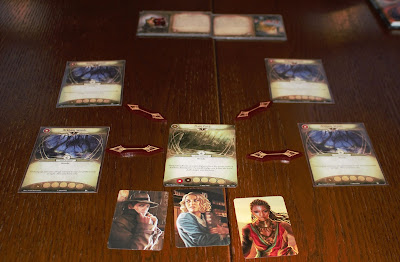 Early on though the game seemed intent on beating us down. The first turn was horrible  we scattered like the Mystery Inc gang and each ended up in a location where no one could get any clues. Roland even managed to land on the old cultist site and not only gained no clues but also gained a damage and mental trauma. Meanwhile I had a master plan. I had in hand Milan Christopher, Medical Texts, Pathfinder (1XP) the card that gives an extra clue if you pass an investigation and the '2 wild tokens draw a card' if successful. So I planned to play Milan move a location, get 3 clues, 1 card and 2 resources. I could then the following turn put the medical texts down, start healing get another clue and play the pathfinder. Brilliant. Unfortunately the first turn I landed on something that used agility - so no clues and no ability to play my cards. The following turn I moved to the old cult site and went for those clues. With 7 vs 4 I was reasonably confident until the Old One turned up and -5 put paid to that. Last action …auto fail. So still with no resources at the end of turn 2 and on my own in a location where anyone coming to help against an enemy would takes mental and physical damage. Bugger. This could go south very, very quickly indeed. All it would take is a particularly evil encounter deck card and we never get those in Arkham now do we? 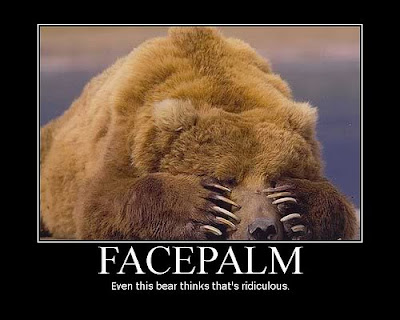 Meanwhile Roland had scuttled to Akachi's location and between the two of them collected 3 clues. Again showing up poor Daisy who was obviously still a little shell shocked from collapsing in a graveyard last scenario (that's my excuse 'role play')

Back to the game the encounter deck getting in the swing of things now and cultists were popping up along with Goat Spawn (bad random encounter cards choice) but I was also lucky to get Chanting so finally managed to collect my clues, get the pathfinder down and scuttle out to a safer location. We started to get things under control at this point and were able to juggle encounter cards whilst collecting clues. We managed to advance the act but was left with a 'Relentless Dark Young' and Ruth Turner sitting on the main path and had to spend some time planning. 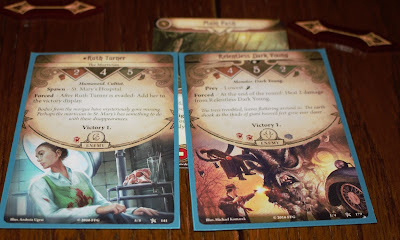 This is not what you want blocking your path

What we came up with was almost a disaster…Roland moved to the main path and the enemies there promptly engaged him. That allowed Daisy to scuttle past to the Ritual site where a lone cultist was standing. Huzzah! We advanced the act but that generated two ghoul minions now also engaged with Daisy. Things were looking bad but then Akachi came to the rescue. Shuttling to the Ritual Site passed the still engaged Roland she played 'Storm of Spirits' and (fortunately) drew none of the nasties and outright killed all three!!!! From terror to relief in one fell swoop.

Daisy was right to look alarmed but here comes Akachi to the rescue.

The encounter threw out a Goat Spawn for Roland,  'dissonant voices' for Akachi and  Mysterious Chanting for me plonking 2 doom on Ruth Turner.

This meant Roland would take 4 physical and 2 mental if he tried to leave. So he took a risk and attempted to evade the 'Relentless Dark Young', even with the cards he added to the test he still needed +1 to pass and did! This may seem a waste but it allowed him to get to the ritual site with potentially enough health/sanity for two turns of Umôrdhoth(and here again knowing what was coming allowed us to plan moves to help).  We were able to use this turn to basically tool up for Umôrdhoth(in my case I attached a bullet proof vest that would allow me to survive two turns potentially and also to clear my weakness) as he would be turning up the following turn and it is fortunate we did. The hunter goat followed Roland but was promptly squished when the agenda flipped then we were in the end game fight.

I went first. Mind over Matter allowed me to attack 5 on 5 and in three attacks of hitting the otherworldly monstrosity with my books I managed to get one caught in its jaw on a two foot tooth that needed some dental work causing it some irritation and one physical damage. Take that!! Then Akachi stepped up with Shrivelling XP and smacked 4 damage down. 5 done 13! to go.. Roland stepped forward but Roland was now holding a rather larger lightning gun. 3 attacks, one with a vicious blow and the old one had taken 17! Damage. We all soaked up his return attack by various use of allies and equipment (except Akachi who just took all of it herself). The only possible fly in the ointment would be the encounter deck. This though was 'gentle' a Wizard of the Order turned up and Chanting added doom. Finally Akachi had grasping hands. Nothing there to worry us and Roland Sent the beastie back to wherever and we were saved. 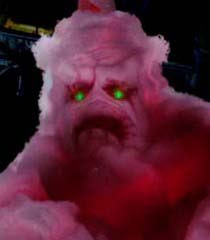 The ancient one probably had this face when he realised what Roland was holding and no one was running...except him perhaps. 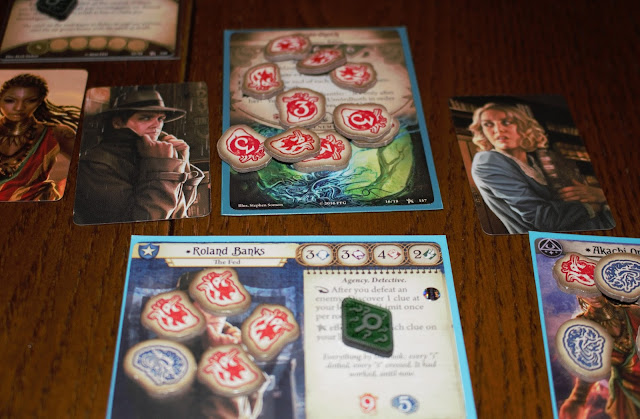 Though Roland's use of the bloody big gun was probably what saved us (without it and a 'normal' +1 damage weapon and we could have killed it in two turns IF Akachi and Roland had hit 5 out of 6 attacks successfully which is not a given) my play of the game award goes to Akachi's use of Storm of Spirits. It was a risky move that could have caused both of us 1 damage (plus the 4  from the attackers killing Daisy). It kept Daisy live and sane to the end kept the site clear so that Akachi and Roland could sort out their weaponry without having to fight off three enemies first. Perfect mystic play - risk versus reward. 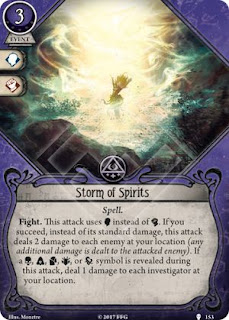 The Goat and Ruth Turner both deserve honourable mention in causing the mother of all traffic jams at the main path that required a lot of thought and luck to get by with minimal damage but Umôrdhoth is the obvious winner. In its one turn it smacked out 9 damage and 9 sanity which means it actually equalled the combined damage each of us did in two turns. 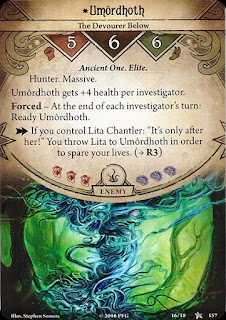 Now that was a buzz at the end. The scenario started badly and it rapidly came apparent at the end that we had no real chance of preventing the  ceremony and would have to face the nasty. We were assisted by foreknowledge and some key cards from later sets. People just playing with core would have a much harder time of it and I suspect (for most) the Lita Chantler escape plan is possibly the most likely scenario result. This is now my third playing and I (in order) sacrificed Lita, lost utterly and now drove it back so have completed each of the endings. This is not a Seeker scenario (the first two rely more on the seeker) and it allows the other investigators to really show their 'thing'. Next time we are setting up for Dunwich. 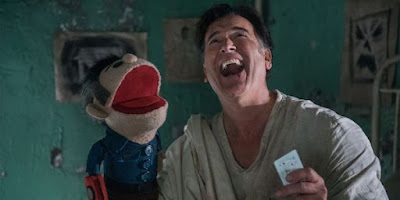 Roland's sanity was not affected by his adventure. Or was it...dum dum daaaaaa