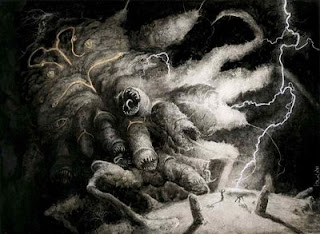 The 'Dunwich Horror' was written by H.P.Lovecraft in 1928; appearing in Weird Tales the following year. For those who are unwilling or unable to read the story (like most of Lovecraft's it is only a short story) this post is to cover the plot as the story is a precursor to the Dunwich Horror campaign and a lot of the characters and locations will presumably be re-visited or met.

The story itself slowly unfurls over its course so this will take the historical approach of listing what actually happened in approximate order. 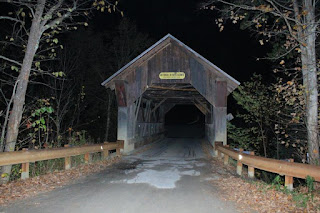 
So in a rather unappetising deep section of New England we have various retarded and banjo playing families (not that the Banjo degenerates were in this Lovecraft story but the relative marrying degeneracy is a similar concept to both) including a practitioner of dark magic - one 'Old Whateley'. His only child is a daughter - a rather repulsive stunted albino woman with bad hair (crinkly hair is a thing Lovecraft particularly disliked he would have loved the wonders of modern shampoo no doubt) called Lavinia. 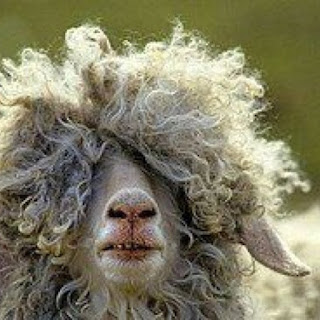 Lavinia might have had trouble attracting a partner but given some lipstick a  nice dress and some big beer goggles and who knows?


One Halloween in 1913 as part of Old Whateley's plot to rid the world of all humans and bring back the reign of some 'Old Ones' Lavinia, by a feat of impressive magic, manages to get impregnated by one of these old ones (impressive when you consider their size and general madness inducing properties, but let's leave all that to the imagination. Or imagine an elephant and a small chick where the elephant drips acid and breathes fire).

Lavinia has twins, two boys - Wilbur and 'Horror'. 'Horror' is never seen (or known about until the end, we will refer to him as junior for the moment) but Wilbur is soon running round growing up far too quickly - walking at seven months, talking at eleven months, talking like an adult at 3.5 years.  His speed of growth was noticeable but apparently he was also pig ugly with large lips, yellow skin, elongated ears and crinkly hair (again). Dogs hated him so much that at four he started endearing himself to the locals by carrying a pistol with which he merrily shot any local dogs that tried to attack him on sight. (Incidentally a lot of Lovecraft's descriptions show his bias  towards other races. One of his most unattractive personal traits was that he was a consistent racist. Though it should be remembered that racism itself and ideals of racial superiority were both common and casual at that point in history and especially prevalent in the USA) 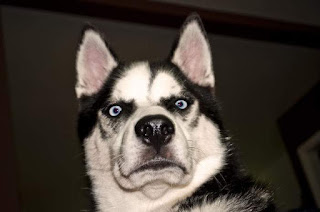 This dog is offended by the mere presence of Wilbur Whateley


The family was merrily collecting cattle to feed 'Junior' and using their own blood to feed him. Their other hobby was home renovation as they gradually made the upper story of the house a secure home for junior including such mod cons as a solid door on the top floor with a handy ramp leading to it (presumably to drive cattle for dinner for the growing lad).

The entire house and its land was now hated by dogs and the few visitors would generally discover Lavinia in the ground floor looking bemused while strange noises occurred in the floors above.

In 1923 they removed all internal partitions from the sealed upper floor of the house as 'Junior' was no longer junior in size though the increase and noise made by the local Whipporwhills (an actual bird) is mentioned by Old Whateley as a sign that his time was coming. Unfortunately for him he was entirely correct, but for entirely the wrong reasons, as in 1924 he dies from natural causes. The local Doctor (a Doctor Houghton) noted various ravings the father made including such delights as  ' too always feed it 'and 'to read the correct incantation on page 751', 'Don’t let it grow fast' and 'it cannot get out before the gates open'. 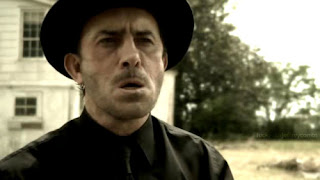 
Wilbur is now corresponding with librarians and is around 6ft 8 tall (at 11). He is also treating his mother with contempt and she has started complaining to a neighbour (Marie Bishop) that she doesn't have a clue what he is doing. It is never indicated whether she knew about Junior. Either way it doesn't matter as she herself disappears a few months after.

In 1927 Wilbur moved his living quarters and books to two repaired sheds and removed all partitions in the house as Junior must have been getting unusually large. Wilbur was not a happy chappy at this point and was noted by Earl Sawyer as being 'unusually worried and tremulous' plus over 7ft tall so perhaps he was worried about how expensive it was buying clothes that fit. Or perhaps it was the enormous monster brother in the house. Who knows!

Anyway Wilbur started searching out extant copies of the Necronomicon during 1928 travelling to Arkham Library to look for discrepancies between his copy and the libraries. He was obviously concerned that the incantation he needed may be incorrect causing the  master plan to fail. Here we meet the next major personality in 'Henry Armitage the librarian'. By reading over his shoulder he becomes both concerned about Wilbur's sanity and plans -  taking the practical step of warning other librarians and not allowing Wilbur to 'borrow' the book. 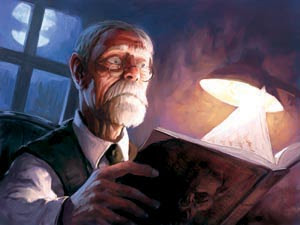 Every day is 'evil monstrosity from space day' for Professor Armitage. He is only 25...


Wilbur then left to unsuccessfully visit libraries further afield. Armitage meanwhile starts to collect information on the Whateleys. With things coming to a head in 1928

Armitage was woken by the sounds of a failed burglary at the library. Wilbur had broken in to try to steal the Necronomicon and been attacked by a dog. He had tried to shoot it but the bullet in the gun was faulty and not gone off and now he was dead on the floor. Armitage had entered with two friend's , Dr Francis Morgan and Professor Warren Rice, and seen a horrible sight. Wilbur apparently had no skeleton his body was leaking green ichor and had tentacles around the waste, furry legs with residual eyes at the thighs. By the time the police arrived the body had disintegrated entirely. Indeed the only human part was the head and hands. 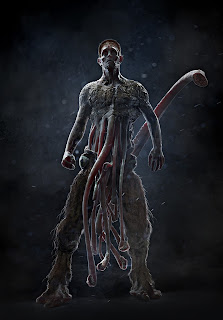 Hints of Frankenstein for young Wilbur


This set Armitage into a frenzy of trying to translate Wilbur's encoded documents. Back home Junior was not getting fed and at some point decided to go for takeaway and exploded the house before demolishing several fields of cattle. Eventually the locals moved all the cattle away so he 'ate' a farmhouse and its occupants instead (Elmer Frye's farm).

By September he succeeded in translating the diary (as it turned out to be) which discussed the entire plan. This planet had apparently been part of a different dimension but had luckily dropped out and they were planning on returning it by opening 'gates'. Armitage, Rice and Morgan start organising a trip to destroy Junior before he could escape. On seeing a newspaper article concerning the cattle they suddenly realise that Junior (or the Dunwich Horror as we can now officially call him) was out and about and no longer constrained by the house. 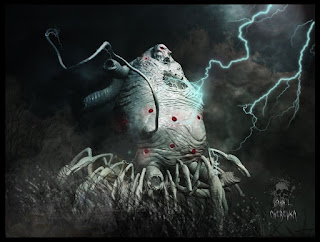 
They drive down and track down the monster helped primarily by locals Earl Sawyer and Joe Osborn - the Horror had eaten the Bishops and their house but being hungrier than ever was now moving about in daytime. Not as bad as it seems as it was as big as a house and invisible. From the damage it caused as it moved they eventually find it and the three men ascended a hill while the braver locals watch through a telescope. Rice used an 'insect sprayer' to spray it with chemicals which made it temporarily visible (and caused Osborn to collapse in madness at the sight) before the three men chanted incantations which opened a gate and made it disappear ('dead' or 'moved' is not explained). Armitage's final point was to tell the locals who thought Wilbur had summoned it that 'Wilbur did not summon the monster. It was his twin brother, but looked more like the father than he did'.

So there we have the story.  It is slightly unusual for Lovecraft in that the three heroes manage to both defeat and drive away the monster whereas most of his stories end in miserable failure. Perhaps due to the fact the monster was only a human/cuthulu hybrid so not a true old one.  This then is also the history with which the Dunwich Horror campaign is involved. We will see how later.