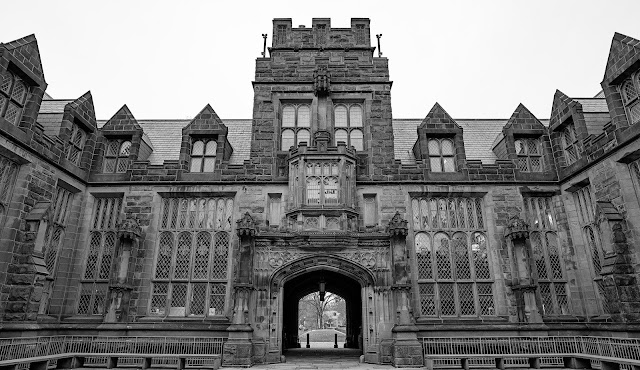 Dear Diary:
Reading of the day Psalms 92:7
When the wicked spring as the grass, and when all the workers of iniquity do flourish; it is that they shall be destroyed for ever:
It certainly feels that evil fourishes sometimes! Being a warrior of Christ with a special mission to eviscerate evil, with sharp pointy objects, can sometimes be difficult to combine with a life as a top chef and mistress of the soufle. But I do my best. After rescuing the Professor we are now on our way to the University even though it is quite late. Yorick works at night so seems quite happy and Rex is convinced that we need to move fast. Will this be a walk in the park or will my knives get to play.


So onwards and upwards. We are visiting the University as the second scenario so, no doubt, added time pressure will be applied.

Before we move to the scenario let's discuss storage as it is something that, I know, weighs heavily on our minds. I am often out and about will bump into a stranger who will say, 'Greetings heroic blog writer. What you haven't covered is how you store your cards'

And I always respond with, "Desmond. It is true. But I will, at some point". It's always a Desmond. Even the girls. Anyway. Originally I had all my cards in binders and I found it time consuming to try and drag out each set for the scenario. I also did not fancy the shoe box with dividers approach as I absolutely would drop it on the floor. So I have come up with a cheap workaround. I purchased some coloured card. Printed off the set icons and names and then generated  a front card for each encounter set. This then is colour coded by set (i.e Forgotten Age is red, base set is an attractive pink etc etc) and wrapped with elastic bands. These are then placed in a Dunwich plastic bag or a core plastic bag in a plastic box. Now I find it much easier to get all the cards and if I drop the box? Who cares. Unless its in a pond. Wait it would float! Perhaps 'volcanic lava' should be my problem clause which might be an issue in Hawaii but certainly not Leicester, England. Finally this freed up 2 binders to allow me to store my character cards in class binders so I have a coloured binder for each class. 'Sweet' 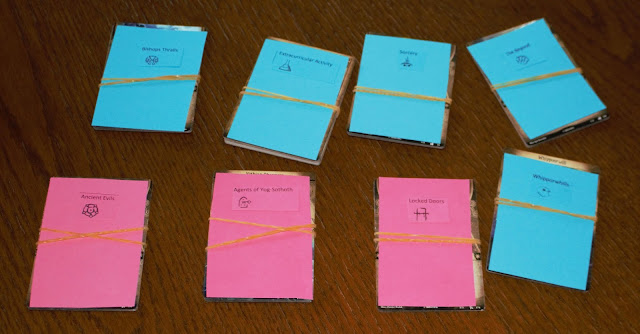 Back to the game this scenario had a strangely inauspicious beginning starting much later than normal with me running a heavy head cold and one of the team then had serious difficulties getting any microphone to work ( windows update? Chrome bug? Extensions issue? Who knows?) though he double logged in to the chat room which also had the strange effect of showing a time delay on the two devices so the same person was doing two different things and being utterly unheard in both. Anyway that was eventually corrected and we rolled into the game where happily for me I had a nice god draw to begin. My starting hand was Survival Knife, Zoe's Cross, Taunt, Dodge and Evidence. Not bad….

We started fairly slow with all players taking a setup turn then started to spread out. This  encounter deck is aimed more towards forcing discards and not to multiples of monsters so, bar a few dodgy tests you really don’t want to hit, the initial cards were reasonable. We managed to spin the act around a turn before the agenda moved and then had all the joys of finding Jazz which sounds like the name of a weak movie that no-one likes but goes to see 'just in case'.

Jazz though did not want to be found (the git) but was eventually found cowering at the fourth from bottom slot of the rather large encounter deck. This took a while but even Zoe was managing to discover clues which is quite a feat considering her low will power. 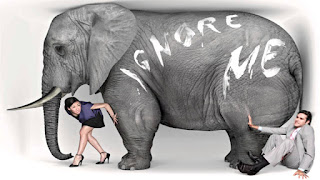 Zoe sometimes missed the obvious, but not today!

Elsewhere in the Miskatonic University the valiant gravedigger Yorick was proving most useful by continually drawing Yithian Observers and killing them (one with his signature card eventually he supplied 3 total XP on his own!). Rex did most of the hard clue lifting and it Is starting to feel disconcerting when he doesn't manage two to three keys an action.

With Jazz in play we opened up the dormitories when a couple of doom adding cards spun the agenda and as it was so late the Experiment was there fast. This led to the usual fun discussion on what we want to do/achieve and we eventually settled on Rex trying to clear the dormitories of clues (nine) - he was 'there' and it was a resolution. In the meantime Yorick would go to the dormitory ,as well, to clear an annoying Thrall off of Rex and Zoe (who had drawn a whippoorwill) would see what damage she could do to the Experiment. Then if it looked likely she (and eventually Yorick as well) could not kill the experiment then we could go for the other resolution. 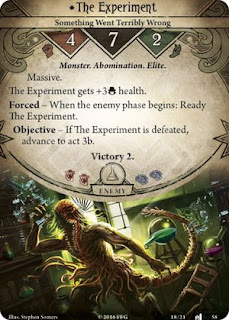 Zoe though was a badass. At that point she had zero damage, four sanity left and her knife, cross and a machete. So issuing a fast taunt the whippoorwill promptly engaged and dropped dead without any further action at all by me. I then dropped an experienced beat cop and the next turn the agenda spun again and the experiment moved in and (semi (massive)) engaged. With her knife and beat cop Zoe was only one (actually two I forgot the beat cop gave plus one fight duhhhh) above the experiments fight of four. The experiment has sixteen! Health and did two of each damage type so unlike Roland last campaign with his lightning gun ripping a massive beast apart in a couple of turns Zoe had her work cut out for her (cut out - get it..sorry)

She then used her specialist fighting technique that can be adequately demonstrated here.

Though with the potential to  only really do two damage  a time the first turn she did one with the beat cop and six with the machete and then in the enemy phase used her survival knife to pump that two higher with the survival knifes free attack. The following turn the experiment moved so she only gained a further two attacks one failed (-3) and the other passed (auto-pass!) so that was another 3 damage. I dodged the attack on return as I was playing safe with the encounter deck but needn't have worried. I then finished it off the following turn.

Elsewhere Yorick had run to the dormitories to assist the team by killing the Thrall that had just engaged Rex. This would allow Rex to use his super-human clue skills to gather all the clues - and he thought he could get all nine in one turn (he had Doctor Milan and Higher Education in play). Bravely he ran in and threw a knife. Drawing auto-fail he missed and the knife went straight towards Rex. Accidentally hitting Jazz in the face killing him instantly (well knocking him out). The thrall then retaliated doing one of each back to Yorick. Ouch. Rex had to adjust his plan somewhat and killed the thrall (in one action again curse combat Rex) before collecting six clues and obviously due to the overload promptly had a drink (drew Rex's weakness). This did not affect his ability to get the tokens as being at +stupid levels the two tokens drawn could not stop him from easily scooped the last clues. 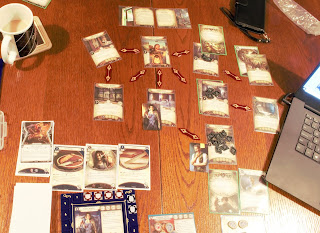 Not so stylish (almost) end shot as the cards and tokens fly everywhere
and the key additional items like 'cup of tea', 'laptop' and 'phone' present

Yorick meantime was supposed to come and help Zoe with the Experiment but drew the second Yithian Observer which was killed.

So another successful scenario with no less than seven experience. (2 locations cleared, library and dorms, 2 yithian observers down, 1 Yorick's signature card,  2 from the Experiment) which is good going for early in the campaign and should set us up nicely for the next game.

As this slot will often become 'biggest monster time' the Experiment wins this. Zoe's attack could have gone badly wrong though as I started with a dodge and Hypnotic gaze in hand and drew a second dodge during the fight the worse situation would have been 'not' killing it until it got to the dormitories and started snacking on students. 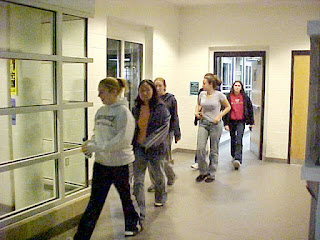 Students, like little walking chocolate bars to the Experiment!

Sorry Yorick I have to go for the valiant attempt to save Rex by throwing a knife at the thrall and hitting Jazz then getting battered in return. Sometimes these work and sometimes these fail. This didn't kill the party so can stand as a moment of amusement!

I love spending lots of experience. Since I have decided to be true to my fast fighting knife Zoey I was considering two paths. The first was to replace the first aid with two Moment of Respite which cover Zoey's biggest weakness or alternately a more risky alternative of one Key of Ys. This has the potential to push Zoe to fabulous levels. With 3 horror on it she has had 3 horror saved  from her or her allies but her base skills would be 7 brains, 5 books, 7 fight and 5 evade! This makes her far more resilient to her biggest weakness - which is tests which damage her from encounter cards. The 10 cards discarded hurts but this is not a mass draw card deck so I may take that risk. The other problem is that the accessory slot is good with her cross and this competes but I would have 2 xp left over and allowing we get one next scenario I could buy relic hunter which would allow me to have both in play….Decisions decisions… 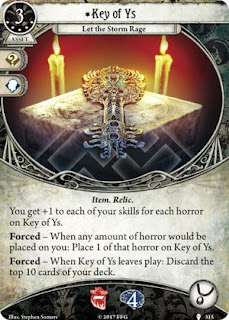 A nicely designed scenario. I like the search for Jazz and the continual card discard threat level encounter cards. Splitting the groups attention between what they want to do (perhaps against what they should) is also great. Last time I played this it was as the first scenario and we rescued the Professor letting the experiment run wild (fight that? Bugger off).