The Dunwich Legacy - The Miskatonic Museum

So to recap. The second coming certainly looks close. I have had to dismember assorted scum all over Arkham. Is there no place in this iniquitous town that is  not filled with abominable, armed nasties and other disgusting horrors. Fortunately I have sharp steel and an equally steely heart. Our journey continues except that now the Professor wants us to find a book of evil. We even have some special words to say when we retrieve it..

The museum is our target and since they are at the forefront of disgusting Darwinian arguments I shall enjoy any righteous destruction I need to cause. The local priest also says that dinosaur bones are made out of plaster-caste so lets blow rasberries at the curator while there.

Reading of the day


Ezekiel 3:17-18
Son of man, I have made thee a watchman unto the house of Israel: therefore hear the word at my mouth, and give them warning from me. 18 When I say unto the wicked, Thou shalt surely die; and thou givest him not warning, nor speakest to warn the wicked from his wicked way, to save his life; the same wicked man shall die in his iniquity; but his blood will I require at thine hand. 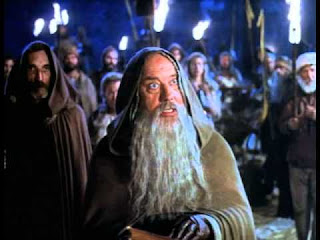 Another old bloke after a specific nasty book. Co-incidence?


So after a skipped week mainly caused by me prepping for the Birmingham games expo (19k plus visitors making it probably the 3rd biggest tabletop games convention in the world) our valiant trio return for a sally into the local museum.  Beyond sticking it to the forces of evil (considering I am playing Zoey perhaps 'stabbing it' would be better) my main aim is to get enough XP to allow the extra item slot from Relic Hunter ( it needs three XP and I have two remaining). I don't think it is possible to get 5 more, beyond that, for an extra key though that would be nice.  I bascically want the ability to have both the key and my cross in play turning Zoe into a high ability multi-talented investigating machine. As a quick aside I will playing the Keys of Ys with a house rule which is that whenever Zoe (or one of her cards) would receive horror then one will go on the Keys. If you can delay it resolving then I think it is slightly overpowered. 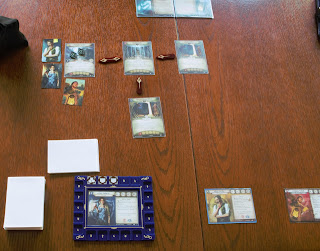 A now obligatory 'out of focus' shot for game start. I had funky new bases for the other two investigators arrive: but they wont be appearing until the next game


We got in to the museum easily enough with a Shroud of 3 proving of little difficulty to a 'Higher Education Rex' but then things started to look unexpectedly ominous.  I had another good start and was reasonably satisfied with my turn two with a Survivor Knife and machete in play and a 'First Aid' in hand. Then I drew my weakness and in 'this' scenario discarding cards from the encounter deck until you find an enemy manages to draw 'just' one enemy  the 'Hunting Horror' so gets the big nasty out early. 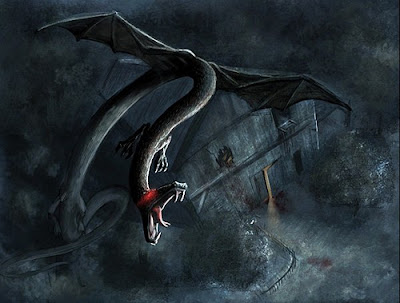 Japansese Dragon influences. Plus how does it fly?? surely the tail would make an enormous drag chute???


No matter we would just have a larger beastie down the line. At the same time just after Yorick had spent a turn knocking down a locked door another locked door appeared where Rex was standing leaving only a more unpleasant encounter hall. Yorick wanted a go at the horror with his own machete first as he had his signiture card in hand but he missed and received damage for his trouble. I then strode in and slapped it down easily enough releived that I was not going to get out-guardianed by both my non-guardian compatriots.. 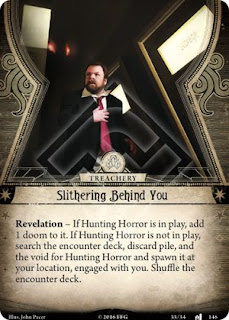 So the bloody Hunting Horror came out again and on me with 3 fight, 4 health and 3 evade. Before most groups meet it for the first time we now had met it twice and larger. Again this is what Zoey does so I went for my turn first. The resulting three attacks were ' auto fail, -4, -3'…great. End result was me with 4 physical trauma,  4 mental trauma and the horror with no damage. Yorick promptly charged to the rescue moving in and engaging before hitting it for 2. This then allowed me to kill the following phase..

Even without that somewhat phyrric victory I was feeling rather battered and worried that my knives were not sharp enough as we would have at least 2-4 more visitations at average luck and if 4 then it would be at 7 fight 8 health and 7 evade. Ignoring  that which has not occurred I tried to focus on the immediate issues and used the first aid to remove most of the mental damage then a guard dog was bought into play to help protect against my weakened physical state. As a plus Rex was very,very rapidly hoovering up clues and opening Exhibit Halls so perhaps we could avoid too many more repeat appearances. 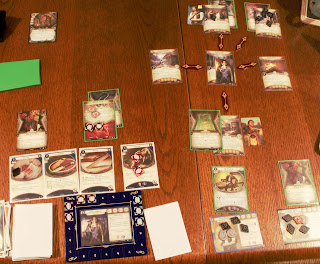 Without giving much time to gather breath  the agenda finally flipped and the Hunting Horror arrived again. Though in retrospect the agenda text trying to raise tension with the appearance of the big nasty was somewhat spoilt by the fact we had beaten it twice. It was also now a 4 fight 5 health 4 evade and I was only at 5 fight with the machete so game on.

Predictably perhaps my attacks at only one above did not go well but at least my guard dog soaked the physical damage up with the dog doing 3 damage back whilst I reeled under a further 3 trauma bringing me back up to 4. This did serve a purpose and that was to allow Rex to open up one of the key exhibit halls and luckily enough it was the Restricted Hall. Rex promptly moved across and the hunting horror immediately followed him. This allowed me to get the Keys of Ys in play before getting a single failed attack in. I was now not worried now though as with the Key of Ys in play I was  on 6 fight with the machete and 7 fight with the survival knife and it was the survivors knife that finished the beastie off for the third time. 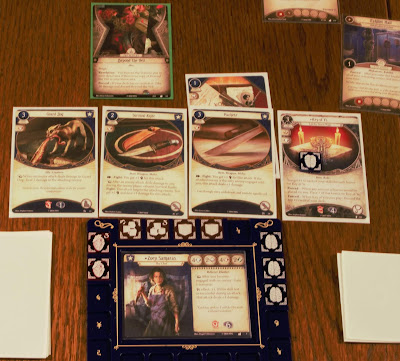 Apart from the strange yellow tint the photo app seems to have applied . How is that for a combat setup even for this particularly nasty nasty.

We could have finished at this point but as we had around 6-7 turns before it turned up again and I was confident I could hold even the massive version off so we decided to leave a clue on the Restricted Hall and to start cleaning clues off of the other victory locations (including those halls we had not revealed yet). This was a lot of work for Rex but he was very good at doing it whilst I carried on steadily tooling. My end display added a replacement handy guard dog and a 'Reliable' on my machete. 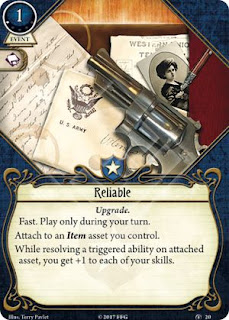 If the Horror appeared again my base attack would now be base 7 and if I took more horror base 8 then base 9.  Allowing I did not use the survival knife I could soak up any retailiates on the Key and Dog.

As it stands it was  not needed. Rex gathered most of the clues with Yorick picking off the last just as the agenda was about to pop.

Bit of a roller coaster ride this one. The start was hectic but it did stabalize at the end. I love the impact of the growing horror and the fact the rest of the encounter deck is all about attacking  your hand size and assets (I ended up with  the dreaded Beyond the Veil in play and only five cards in hand). 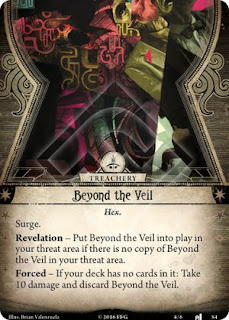 The unexpected synergy of Zoeys signiture weakness and this one big nasty was unexpected but a hurdle we were able to surmount. Plus we managed another 6 experience! This means I can buy a second copy of Keys of Ys AND relic hunter (ooooo I just realised it is not unique I could get two copies in play and conceivably have 10, 8, 10, 8 base stats…

For the resolution Zoey argued resolutely that there was only one book of power everyone should use and that is , obviously, the bible - but Rex was to drunk on increasing power and Yorick was ambivalent on the subject.

Why would anyone want to read this book?

The Hunting horror is great and an excellent 'different' big nasty. Plus the encounter deck does a good job of supporting its presence and actions. But for this game I am going to go for the amazing art of ''Passage into the veil"  - great work by the artist Owen William Weber. 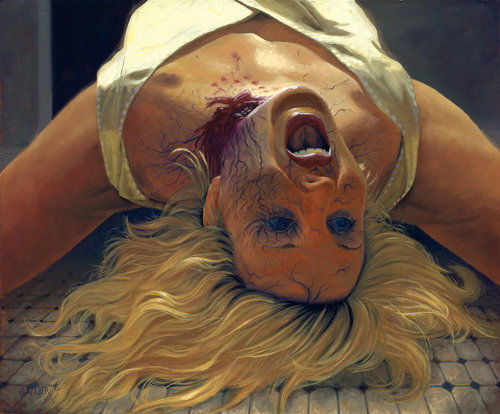 I mentioned mid game that I loved the evocative art for this so promptly drew it three times in a row. The Key helped me defeat its nefarious purposes though.

'Not dying' perhaps..No, play of the game goes to the highly educated Rex who managed to scoop up 5 clues with one action at one point. Here is his card at end game AFTER all locations had been revealed…. 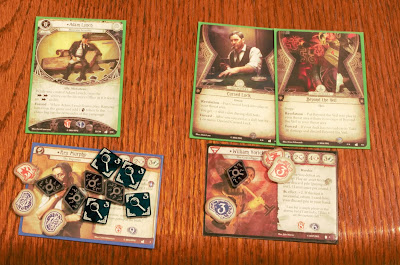 Run out of clue tokens for Rex. Alas poor Yorick is 'cursed' to only have one in comparison

The dreaded Essex County Express. This is one of the hardest scenarios in this campaign so it will be a challenge..


Zoey studied her knife intently and tooks some test slashes before smartly dicing some onions for a tasty stew. That old testamanet beastie had certainly been a challenge. It so was not a surprise that God had told her where it was and that it needed to go. Actually, thinking about it, it looked a lot like a huge winged snake. If any monster was probably the snake from the Garden of Eden then this was it. It was a shame her compatriots were so open to corruption that they they decided to keep a book of evil. It practically had a sales team marketting it with the words 'fall into Satan' or  'read this and be corrupted' all over it. No matter her knives would do for them too if it came to that. Rex was not a surprise as the man was obviously desperate to be 'relevant'. Yorick's decsion though was. Perhaps his work in the cemetary had bought him closer to temptation than most. He would certainly regret his choice when he considered the implications. At least she hoped he would.