The Dunwich Legacy - Where Doom Awaits

The dreaded penultimate scenario. Considering I have never got passed this one I do sometimes wonder that if I do play the next (Lost in Time and Space) whether opening it will reveal just cardboard and a note saying 'not possible to get here so you really should not have opened the pack.Soz..'.   Hopefully the elite team crammed full of experience overflowed investigators can break the duck.

I took a greedier path with my upgrades adding two 'Moment of Respite' and losing two 'Heroic Rescue'. Some manner of saving my weak sanity is required so this seems a valid way forward.


Well it is rare that evidence of Satan's work is so prevelant but considering I have just had to send back to hell giant monsters I feel it shows both God's favour and Satan's presence. Now we try to stop weak satanists from opening the world to hell. Rex hopes he can persuade them of the wrong they do and William apparently wants to convince with a cunningly designed soliloqy. I suspect neither will work but six inches of sharp steel in the stomach will rapidly make them re-appraise their evil intentions...

And I will punish the world for their evil, and the wicked for their iniquity; and I will cause the arrogancy of the proud to cease, and will lay low the haughtiness of the terrible. 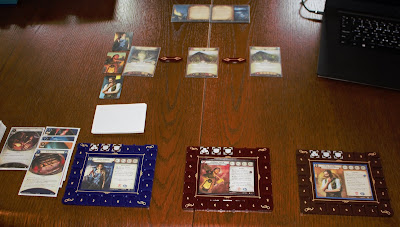 As always a 'not useful' setup shot

Campaign progress is 'really' important in this scenario and though you have lots of time on the Agenda there is lots to do and a really clever set of hidden locations. After the usual setup turn (I played a Guard dog and Survival Knife) we had Rex easily open up a path enabling us to attack the required act clues next turn. Then the problems mounted. Firstly an irritating avian thrall arrived. Irritating because we were not really set up to take it on. Zoey had a go but after a less than stellar chaos bag draw only managed one damage in that turn. Then Altered Beast turned up and healed it. Next turn I dropped the Key of Ys soaked up the opportunity attack and still managed only one damage. Yorick was having none of it at this point and engaged it so he could hit it with a machete. This also went badly with the end result being still 1 damage and an attack in the enemy phase. Yorick did what we all would and shoved the elderly Henry Armitage in the way of that damage instead #hownottotreattheelderly. Rex meantime was hoovering up clues and wondering what his fellow party members were doing. Thankfully Yorick took it out turn three just as Rex opened up the middle hill location.

Zoey easily smacked down a lupine thrall and Yorick also dealt with a Wizard but things were actually looking dodgy. The problem (for me) was that I had drawn Beyond the Veil and with a Key of Ys with 2 sanity already on it and a rapidly disintergrating deck it looked like I would be dead sooner rather than later.

This though is where Rex came into his own and we rapidly opened up Sentinel Peak all the while admiring the clever 'on reveal' penalties and the fact many locations can be flipped to unrevealed so could fire again.

Due to our earlier treatment of Silas Bishop we actually had an easy middle act and instead of having an enormous 5 15 5 with retaliate punishing us we could just sweep the clues for a gentle complete. It was actually a great example of how the campaign structure can really enhance the game...We were also really helped by not having to face a conglomeration of spheres so good news all round.

End Result - the Earth was saved and four experience was gained (2 from the peak, 1 from the Wizard and 1 from Buried to Deep)

The end and victory!

We are on Sentinel Peak. I have 12 cards left and a Key of Ys with two sanity. We need speed and Rex declares he is going to show us how it is done. He pathfinders in and investigates pumping to a 12 (to 6 , the location had obscuring fog on it) and says ' watch this as I am going to get a shitload of clues'. We wait with baited breath for an impressive display of intellectual might and he draws...'auto fail'. So basically tripped up and sat one of his dictionaries. This then is the play of the game. To give the drunk reporter some credit he still still hoovered the clues with his remaining two actions and it was his clue gathering prowess that made this a simple run through.

It should be Seth Bishop. But the Avian Thrall can have it for delaying two investigators for three full turns. Git. 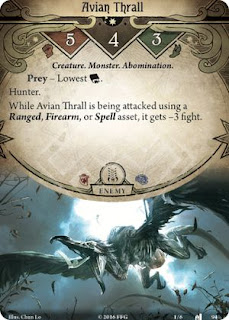