The Path to Carcosa - The Last King 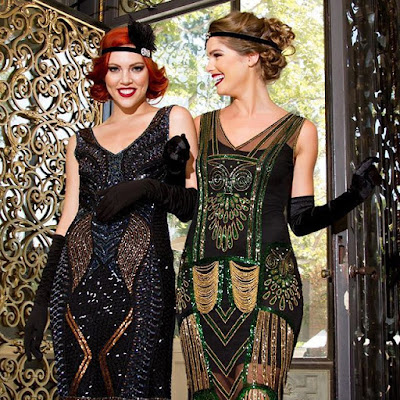 The girls are ready to go party to save the world! One does wonder where they store all those weapons, or Minh her backpack..

I shudder to describe what occurred at the play, suffice it to say that my particular talents were needed and I have totally lost any desire to eat octopus. There was 'something' in that theatre that was a bit like Billy Blithe - do you remember him? you'd manage to block one hand from approaching your chest and find another had mysteriously gained a death grip on your backside. The man had more arms than was decent and no self control.  Hmm may be going off topic a bit here... Daisy - she of the inexhaustible wallet - has decided we are going to crash a cast party and has splashed out (a lot) of cash on some lovely dresses so that we look the part. I have enjoyed the shopping not certain I will enjoy a party with murderous psychos.

I am also not sure Minh was entirely appreciative of her fine clothes as I am sure she will dump them as soon as is possible for a beige cardigan and sandals - though  remind me to tell you how she came running out of the theatre dressing room wearing nothing but underwear and some reuplsive smelling slime. 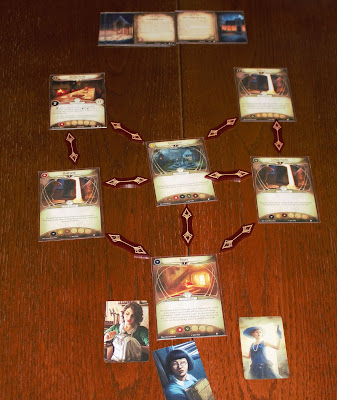 The usual, not that useful, setup  shot. tbh its missing the bystanders so is not even that accurate!

This scenario is one we, as a group, are well suited for. Our particular skill sets are nicely balanced towards each of the peeps we want to investigate so we should do well. Being tooled up with xp helps and I took two experienced Shrivellings, the Book of Shadows (allows my spells to recharge) and two Spirit Athame - Agnes tooled up is a good fighter but that tooling rarely lasts and these choices should make her more consistent..As I was adding 4 cards I dropped the Astral Travel, the two Improvised weapons (the Athame essentially replaces them) and a Hypnotic Gaze. 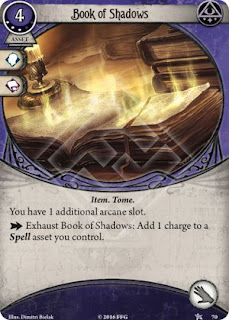 We did the 'Scooby Doo' and instantly split up with each person targeting one of the Bystanders. Nice plan! unfortunately stymied by some horrible encounter draws. I kept getting corrosion which wiped out a Holy Rosary and then my Heirloom and 'tough crowd' was drawn two turns in a row by the others so we managed bugger all of anything achieved after two turns. This was distressing as the Agenda rolled over and the Dumaine woman arrived - luckily once we clear one Bystander she loses a lot of potency, at least until that Bystander changes. Now Agnes particular skill set proved useful. I had also drawn a 'Young Psychopath' so 'chose' to take the engaging horror to do one in return. Then in my turn I simply ignored her and drew an attack of opportunity which allowed a further damage killing her. This allowed me to move to the courtyard and attempt to get two clues from Ishmaru. I only gained one but that was enough to allow Minh to finish her off and move over to Constance Dumaine. 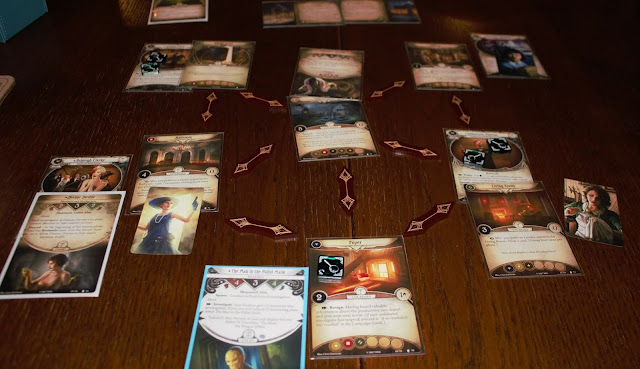 That turn Jenny cleared Ashleigh (she had Leo de Luca out so four available actions) and with a lot of money (around 20 at this point) moved over to Jordan Perry. 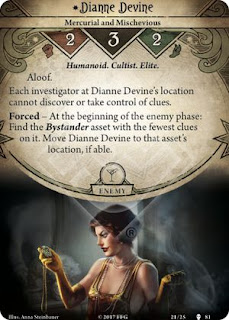 Now time was not on our side and the first bystander turned. Fortunately enough it was Ishmaru and Jenny showed confidence in 'handling her' which was helpful as the Man in the Pale Mask had arrived in the lobby and I was moving to deal with him. A further Young Psychopath meant that I was actually getting a bit low on Sanity so a fortunate Clarity of Mind allowed me to lower my sanity loss from 7 to 5 prior to moving to the Pale Mask. Meanwhile Jenny evaded Ishmaru before 'turning' Jordan Perry while Minh finished of Moreau - we had now talked to everyone and just needed to get out. Moreau now turned and he was close but as Agnes easily finished off the Pale Man with her sole Shrivelling use we could just hop out and resign. Minh did the same before Jenny decided to play a Delve to Deep to try and get some extra XP. - whilst engaged with cockroaches with Sebastian a location away. She survived the resultant cards and attacks and due to resigning not triggering attacks of opportunity was able to hop out for the win.


We decided to burn the place down, what's a little arson between friends when confronted by a madhouse like that...


Player of the Game

It was actually quite close this game as we all did what we were supposed to do but for sheer style points the award goes to Jenny for letting Ishmaru come to her location, absorbing the attack then evading her, finishing off Sebastian then moving off. All in a turn and allowing the rest of the party time to safely clear the exit. 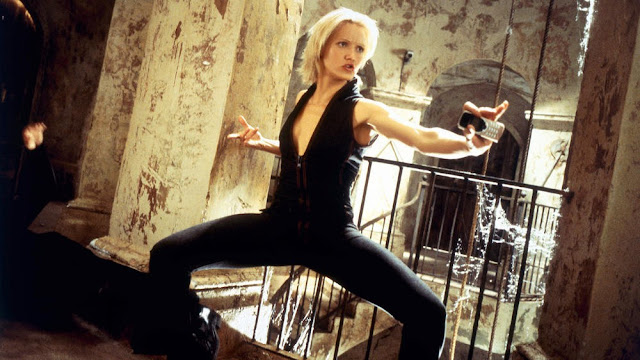 Jenny is ready for all!

The Young Psychopaths were the most irritating but for simply stylish design points this award will go to Ishimaru Haruko. I love the change text for the bystanders and they are all horrible monsters to fight and though Jenny handled her without fighting it is still a great card (as are the other bystanders) 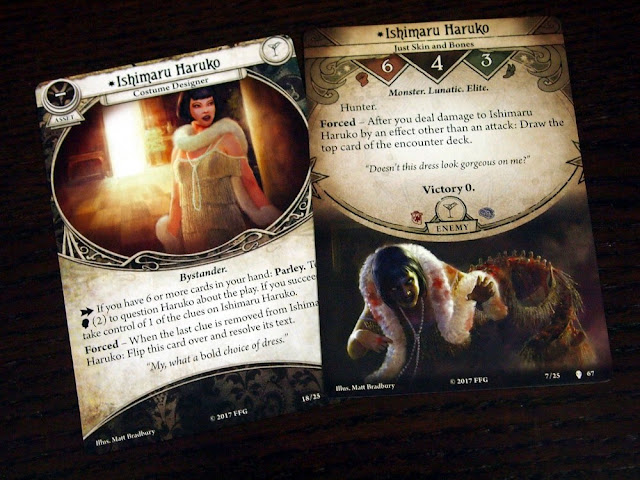 We had around twenty two clues at the end so split it 4/4/3 with 1 extra XP from the Delve so 5/5/4 with Jenny having the 4 (but also Charon's Obal to not mattering so much). We should be well set for the next mission which is the Asylum ( another great scenario) allowing I have remembered correctly..
Posted by Matrim at 11:19