The Path to Carcosa - A Phantom of Truth 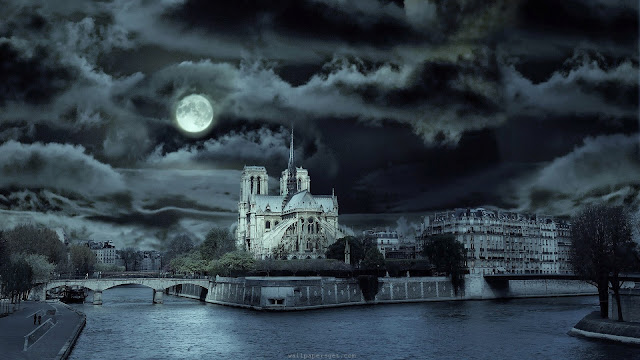 Ah, Paris, after regaling each other with stories concerning scary caricature drawers outside Notre Dame we started. Jenny and Agnes seemed to have decent starts I had hard mulliganed for Shrivelling and managed to get one along with two time warps! And holy rosary. With the extra cash from having interviewed Jordan (why extra cash did we pickpocket him? Or was it that expensive 'leaving' the train station - perhaps those damned caricature artists 'charged' too much and we would otherwise have been caught in a tourist trap. Jenny meanwhile managed her fifth scenario on the trot with Leo in the opening hand. You have to hand it to him. He was paired with her in the book and is obviously smitten as he never leaves her side even when she frequently causes people to shoot at him and monsters to stab him. That's love. Or infatuation. Admittedly she does seem a catch if a little 'out there'. 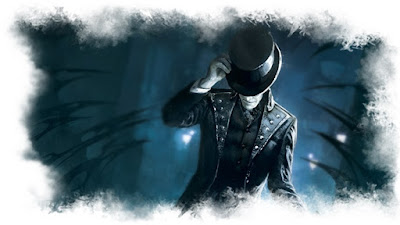 Minh had a reasonable start with Doctor Milan turning up early (never did that for me when I was a seeker. ) But as a negative used her backpack and suddenly realised she must have forgot to pack it.

This was all needed though as early encounter draws were unpleasant. I picked up two damage from failing one test (and did the same later on so was dangerous close to passing out) and also drew a screeching byakhee. Since I was nicely tooled up and it had a victory point this made the group happy as I zapped it quickly. An early Arcane Initiate was put out that drew another Shrivelling and the clue search spell just before I accidentally pushed her into a different byakhee so the doom would not prevent the agenda from advancing , 'thanks for the spells, byeeeeeeee - splat' 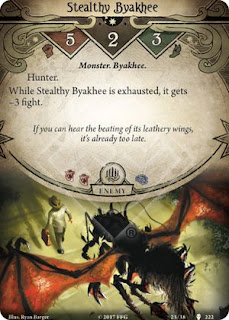 We rapidly shifted past the first act which drew our version of the Organist. Since we were convinced of the evil we had the 'cannot damage does 3 mental trauma whilst hunting twice' version but this is not a major issue for a party of three. The key is to either have one person who is good at evading sitting close to him OR split the party into different locations and essentially play 'organist tennis' sending him backwards and forwards without getting to anyone. As it stood we went for the first option as Jenny was ready for him and had bought a Key of Ys out which she 'accidentally' charged by saying Hastur twice. Woops. This did allow how to lead him round like a small dog after a treat and the ever present loyal (slightly bleeding) Leo with his extra action really helped in this process. This allowed Minh to spend quality time trying to get rid of the King in Yellow (Jenny always finds Leo, Minh seems to have an affinity for her weakness) and Agnes could wander round zapping people's heads with shrivelling and even getting some clues.

This meant we rolled relatively easily to the end without getting too many  difficulties and finding the rather messy house of Monsieur Ingram.  Due to the zapping of both victory pointed Byakhees and the clearing for four VP locations we also pulled in a tidy 6 xp.

Anything that was not called 'the Organist' has its head shrivelled so the winner here is, perhaps unsurprisingly, the Organist! 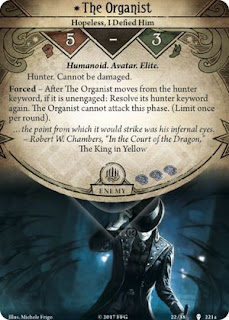 Since he cannot be hurt he is possibly the toughest creature we have had to face (at least this version) and I just like the concept.

Nothing earth shattering and I was considering things as mundane as Agnes engaging a byakee from Jenny to allow her to go do 'stuff' or Minh hilariously spending four or so cards to get the 6 pips needed to remove her weakness - and then failing by one. But have decided Jenny gets this for the amusing method of charging the Key of Ys just be repeating Hastur several times. That's the last time though no matter how many times she may repeat this in the next few scenarios. 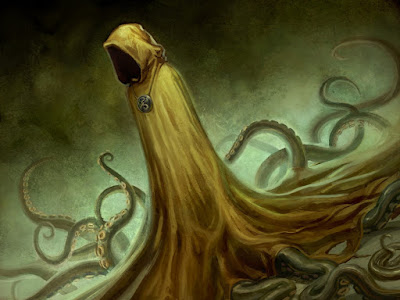 Hmm mentioning this dude when holding the infamous Key of Ys can prove riskily useful.