The Path to Carcosa - Echoes of the Past

The ‘party’ was as bad as I said it would be. These people are seriously warped and have many eager denizens trying to assist them. We ended doing something you only read about concerning deep down south and those horrible KKK people. To put it another way we ensured none of the evil would be able to move out. We are moving to the Historical Society next. Minh should be most at home though Jenny and I will stick out like sore thumbs.  The odds of bumping into more low lives seem strangely high. Considering my work brought me into contact with plenty of other low lives I should be used to it.

Our intrepid trio now has to enter that infamous den of librarians – the Arkham Historical Society. This is a perfect control scenario. If the group can keep down the many cultists and deal with them quickly then the agenda deck is almost entirely under their control. In a group of three this would normally need at least two of the investigators to be capable of dealing with a cultist on their own with the last doing most of the clue work. 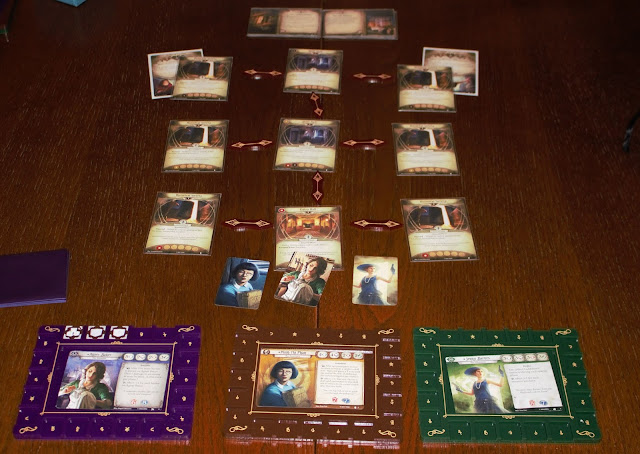 Setup and raring to go

As we started with three we had two Cultists already in play on the upper floor and if we left them to their own devices they would soak up enough doom to flip the agenda in 3 turns. I therefore took a faster start attaching a shrivelling and moving straight up to the 3rd floor lobby first turn. My compatriots started on their own gear and the clues. Our first encounter draw was fairly innocuous though an acolyte turned up generating a further auto-doom. This was not a worry as yet as Agnes was able to erase the first cultist with a  strength shrivelling. Meanwhile Minh (Minh!) moved up to the 1st floor to kill the Acolyte and failed.

Pressure carried on ramping up as I drew my weakness (a Silver Acolyte) and at the same time someone else drew a fanatic that went to the same location. I was now facing two enemies and would be highly unlikely to be able to shift across the 3rd floor to deal with the other cultist who was now on 4 doom (due to The Kings Edict turning up and buggering up all our calculations). 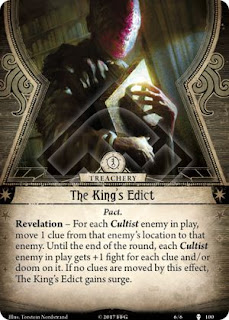 We could still handle things as long as nothing disastrous went wrong with the next turn.  On my encounter card I cancelled with…erm.. and took a horror which  allowed me to do 1 damage to the silver acolyte bringing him within one zap Shrivelling range, Agnes then zapped the two enemies in location reducing pressure and drew out her Spirit Athame (so one attack would be 9! Strength). Minh cleared her enemy and both Jenny wiped out a further acolyte. 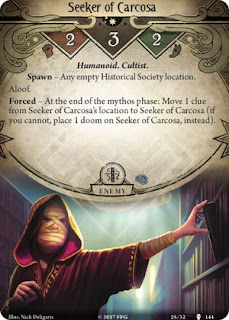 The next encounter draw brought us very close to the edge as an extra doom was added meaning the 3rd floor Seeker would need to die this turn to keep the agenda from advancing and preventing the discard pile recycling. I though was two locations away and it is aloof so the best I could do would be to engage and deal a single damage in the enemy phase. This would not be good enough. Minh was 3 locations away (with pathfinder) so would have been able to get there but was restricted by her Shadows draw. We then pulled off a nice team ‘save’ that really shows how great the game can be. Minh was the driver though as she spent two actions clearing her whispers (I guess it must have been the ‘you can only move one location’ or something along those lines). She then used a fast action pathfinder to move to the 2nd floor lobby then her last action to move to the 3rd floor lobby. She then used another fast action to drop the shortcut on the 3rd floor lobby. This allowed me to move to the 3rd floor lobby, fast action use the shortcut to move to the other room and engage and zap the cultist with a 9 strength shrivelling. Those were all used but the cultist died and the agenda was saved.
That was the key risk point and we were in complete control after that. Jenny switchbladed a Hunter of the King to death and we rapidly pushed forward to clear the hidden library and win out. We did consider whether we should delay finishing to draw the big monster at the end to get a further two experience but it was late at this point so we called it a day. Minh and Agnes both collected three experience and Jenny pulled 5 (Charons Obal). Next up the wonderful asylum scenario.

Has top go to Minh’s use of pathfinder and shortcut to allow the group to get where it otherwise could not and zap a doom laden cultist. 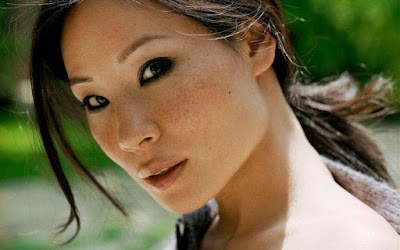 Minh takes the 'hollywood transfor' and removes her glasses and turns into a babe!

We never got to the huge nasties so this goes between the doom cultists who were both one shotted by Agnes and the Hunter of the King. It can go to the second as Agnes was out of spells at this point and in the end Minh chucked acid in its face causing it to disintegrate on the carpet. You don’t mess with the girls. 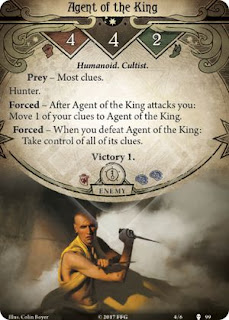