The Path to Carcosa - The Unspeakable Oath

Not the nicest asylum when we left it

A classic! This is such a great scenario. We started positively due to our great result in scenario two with each of us having an extra 'courage' card providing an extra two sanity and instantly did the Scooby Doo and split to rush through as many locations as possible. My starting hand was disappointing as for once I did not have anything combat worthy with no Shrivelling! I did have Rite of Seeking and Uncage the Soul which meant I could at least assist in finding clues though I felt strangely defenceless moving about. 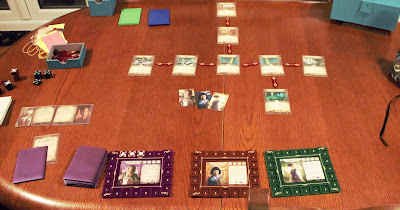 Setup before we decided where to start

Clues did start piling in as I used the spell as my last action (to avoid the potential negatives and by turn two actually had the most clues (4) in the team. I was steadily clearing the mess hall mainly as I could grab two an action so would only have to discard one card. 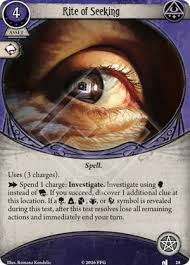 Then disaster as my card draw for turn two was the ffing Silver Acolyte  - someone who (at that point) I had no (decent) chance at killing or evading and no cards in hand to help.  Luckily Minh was tooled up and she was able to move across, throw acid in its face killing it then grab a clue. Beyond the emotional bruising caused by needing to be rescued by the book worm (as opposed to 'assisted') and the fact that if I had not needed rescuing then we would have advanced the act by the end of turn two as it was we had eight clues at that point and the agenda moved instead. 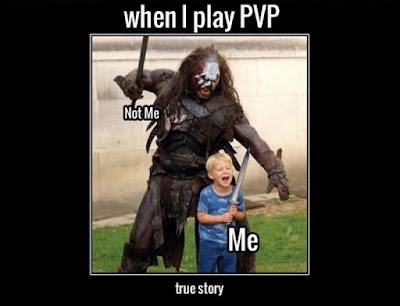 Agnes felt unusually vulnerable. Plus she didn't have any pointy sticks like this lucky child.

Jenny merrily robbed the keys from the Ward Sister and disappeared down into the basement to start hunting for Daniel. Minh meanwhile was starting to collect an almost continuous range of Whispers and other terrors that were seriously impacting her ability to clear the garden and yard or do anything much at all.  I in the meantime I had cleared the Kitchen by the devious approach of using Delve to Deep to get the two clues then cancelling the encounter card with Ward of Protection before setting a fire there .I also drew  Aquinnah experienced who then cost me all of my money (and made me regret discarding an Emergency Cache in the mess hall earlier). 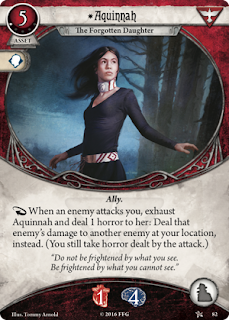 Dressed like that it is hard to see how anyone would forget her.

This proved lucky as Jenny found Daniel in room two and he promptly turned into a monster (spoiler! I love the acts. If you read them you might think picking up the clasp of Black Onyx would be a good idea but if you did then you would not be playing this act. That is so devious and clever. Well played Mr Matt the designer) and was herself unusually badly tooled for action beyond her ever present Leo (who has turned up close to the start every scenario so far - he was her ally in her book though so its thematic as well as helpful).  Jenny then drew a fanatic in the encounter phase so had two nasty enemies she would have problems killing. Not an issue though as she evaded and left the location. 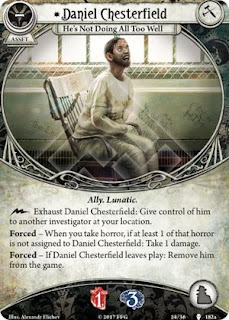 Next turn Agnes the non combat heroine stepped up to the plate with what may actually be an illegal play. She moved in and was promptly engaged by both (receiving and giving 1 damage to the fanatic). She then spent two to attach her Athame drawing two attacks of opportunity. I then added one horror for each to Acqunnnah who dealt both their damage to each other killing both. All I took was the one horror from Daniel. Which I put on my courage card as my ability would not hurt as they were both dead. It is potentially illegal as it might be that the attacks are not simultaneous but even had we not played it that way I could have used the fanatic to kill daniel then only needed one more to kill the fanatic and then had the Athame in play so I will claim the glory and shove the rules query under the carpet with a vigorous broom. 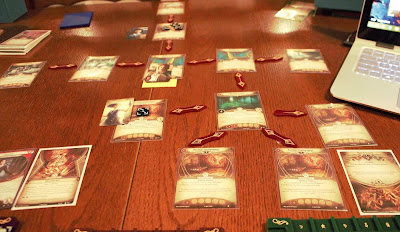 The situation just prior to finding Daniel (who was in the next cell to the one Jenny was currently in. The yellow paper indicates a shortcut on the location added by Minh.

We now had to get out and needed another two 'events' to assist. Jenny grabbed the third and Minh (just) managed the fourth. As the encounter deck merrily kept restocking her whispers/terrors she also drew her weakness and then drew another whisper that prevented using cards at all.

This was the situation when things changed and we had the joy of an auto monster being drawn from the encounter deck. Fortunately (as will be seen) it took 2/3rds of the encounter deck to even find one though the one found was an Asylum Gorger and was not only nasty but also landed on no-combat Agnes in the Basement. Sweet. Not having any chance of standing and fighting I moved back to the Wings being followed by the (fortunately for me) Attack of Opportunity less monster. At the end of the turn though I did have to suck up a 3/3 attack where I dropped one of each damage type on the now dead (defeated) Aquinnah meaning I was left with four of each and was looking a bit of a  risk. A bad encounter card could have sent me over the edge but I drew Filth and Decay so was able to drop 'Fight or Flight' in the next turn and evade it ,with an impressive seven evade, before using the handy shortcut to get me to the garden on time and resign. Minh also hopped out quickly but Jenny was after experience. She moved to the garden and used Delve to Deep to gain an XP.The encounter card was a minorish monster but had another XP should Jenny kill it. Which she did. 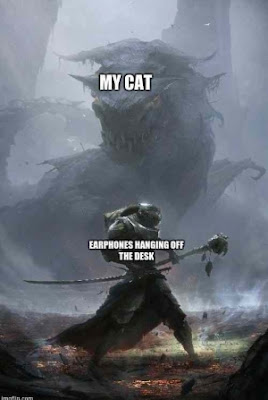 So we survived the asylum and gained 7 xp (I had not spent the three from the last scenario so would have 10 to play with!

Agnes gets it for the Aquinnah in the face defence. Even when she is not tooled for combat she still rules 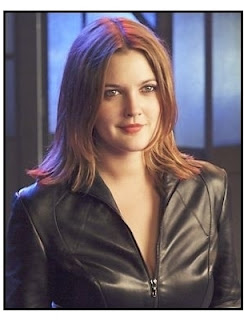 Agnes looked great in leather. Plus it was easy to wipe the blood off.

Though Daniel gets honourable mention here for just being thematic and repulsive the more dangerous monster was the  Asylum Gorger  which almost succeeded in defeating valiant Agnes. 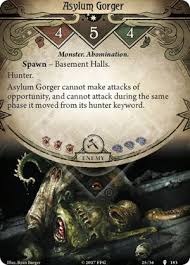